A quiet race, but with a stormy ending 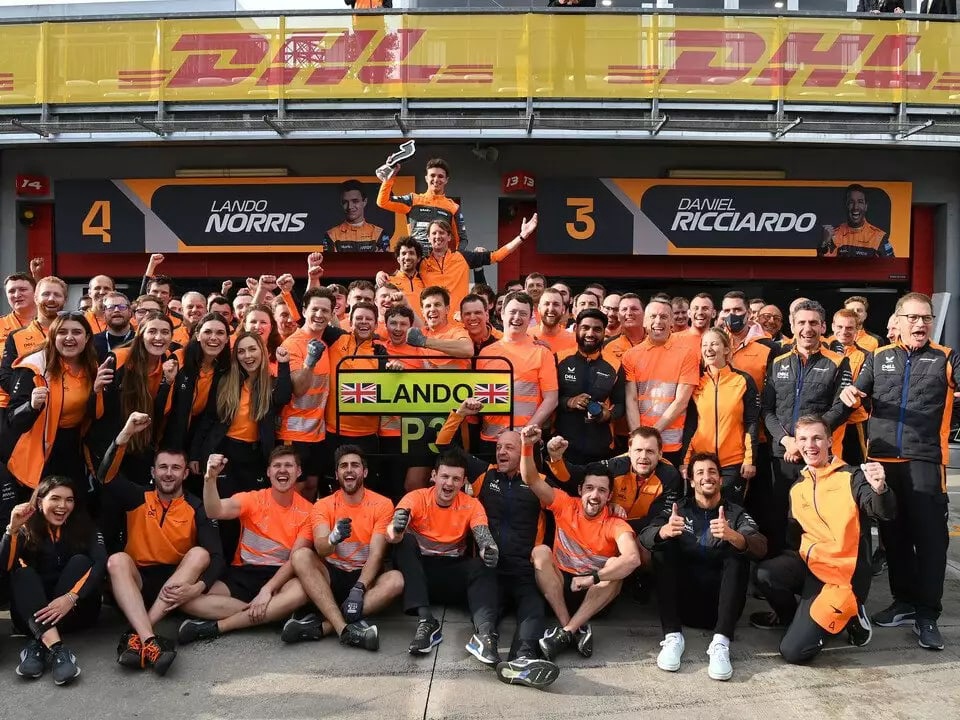 A boring race with unexpected results.

This is how the Grand Prix of Emilia Romagna can be characterized, here are the results: 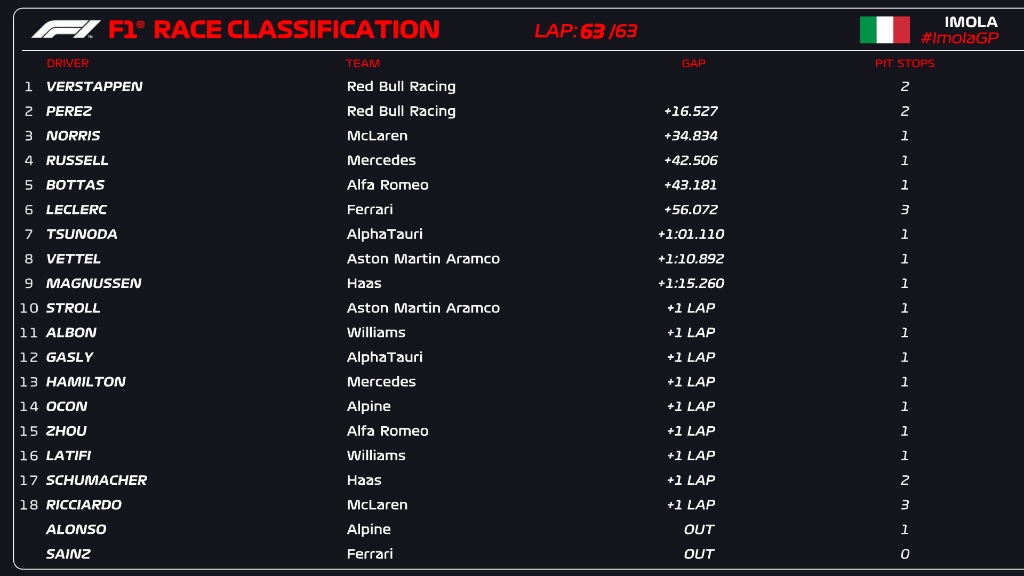 Absolutely everyone hoped for more yellow flags and car descents, and in the end there were two descents - these unlucky ones were Ferrari driver Carlos Sainz, who was unable to finish the race due to contact with McLaren driver Daniel Ricciardo, and Alpine driver Fernando Alonso.

"I didn't have the best start with Charles, we need to analyze what happened there, but we still managed to enter the second corner cleanly. I left Daniel plenty of room, but he apparently lost control of the front of the car and collided with me. I was stuck in the gravel again and couldn't do anything else. This is definitely a difficult moment.

We wanted to have a good race in front of the fans, and there were still 63 laps to go, so to drop out of the race at the second corner is bad. There are always such difficult moments in an athlete's life, and today it's my turn to go through them. As long as I keep working hard, I'm sure the good moments will come” - Carlos Sainz (dnf). 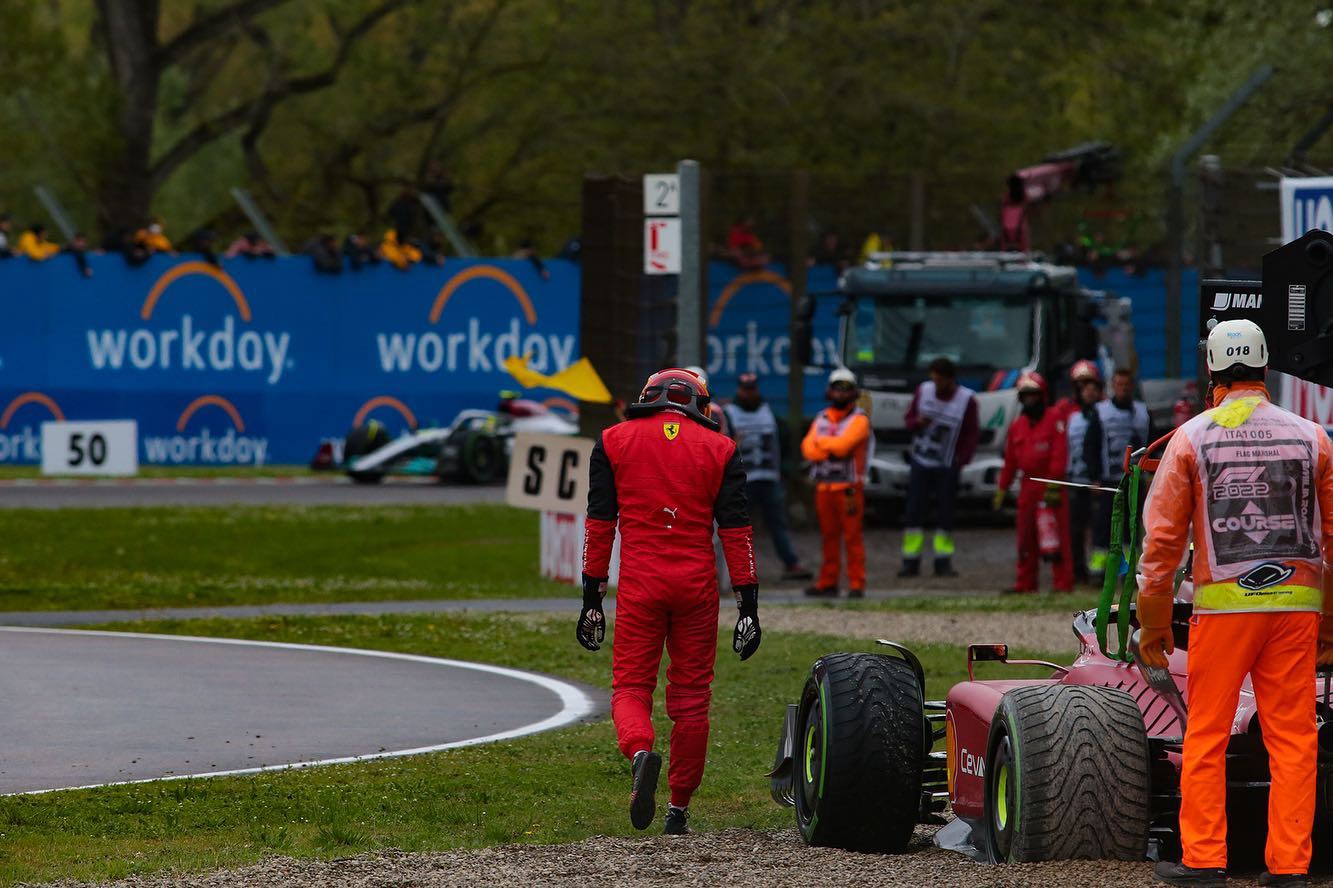 I think that up to now I have often been unlucky in the championship, I could not control the situation, and this is another example. I prefer to finish the season better than I started it, not the other way around. But at the same time, when you watch on TV, and in the first four races I was a spectator too often, you realize that I should have had 25 or 30 more points in the championship. So it's a shame.

But let's see, there are still 19 races ahead. I remember last year after Imola I had only one point, and at that moment the season was a bit difficult, and then we finished it on a high level. So let's see if we can do the same this year” - Fernando Alonso (dnf). 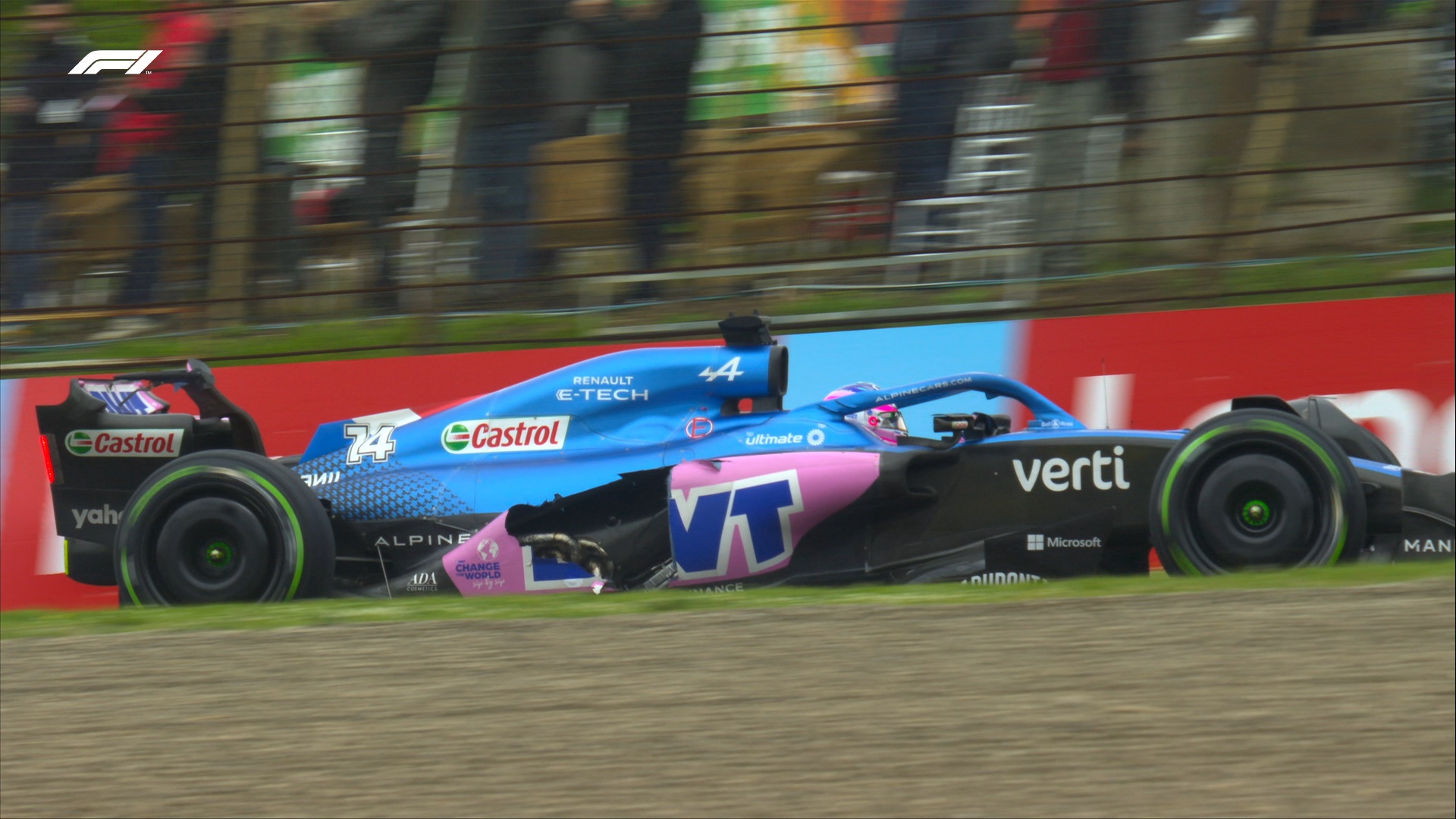 Red Bull driver Max Verstappen won the race, which was an amazing surprise, since everyone thought that Ferrari would be able to win back.

But he demonstrated incredible speed and resilience, which gave a tangible result. In second place was also the Red Bull driver Sergio Perez, who was able to take a double, heroically defending himself from the Ferrari driver Charles Leclerc throughout the race.

"Yesterday and the day before yesterday we were on top, and it seemed that the weekend would be strong. Today... With changeable weather, you never know how competitive you will be... I managed to get off to a good start, but even after that it wasn't easy. As a team, we did everything well, and I think this double is well deserved" - Max Verstappen (1st). 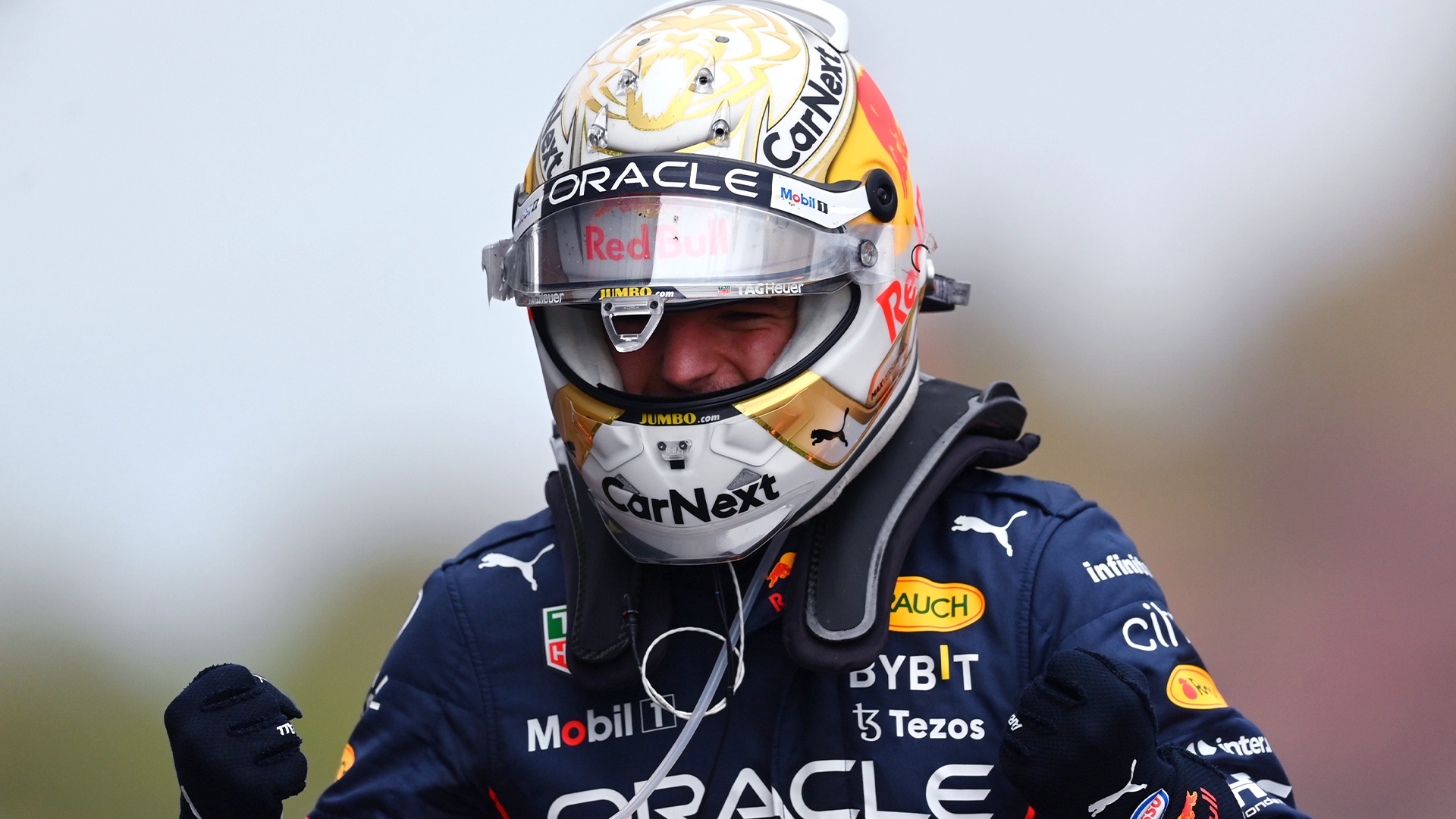 "We were so unlucky that the start of the season was so difficult. I am very glad to see that everyone in the team is smiling. Today is a great day for the team and we need to keep working. I am happy that Max has achieved success today. In the first part of the race, the fight was very intense, we (with Leclerc) fought, and then I managed to take control of the situation” - Checo Perez (2nd). 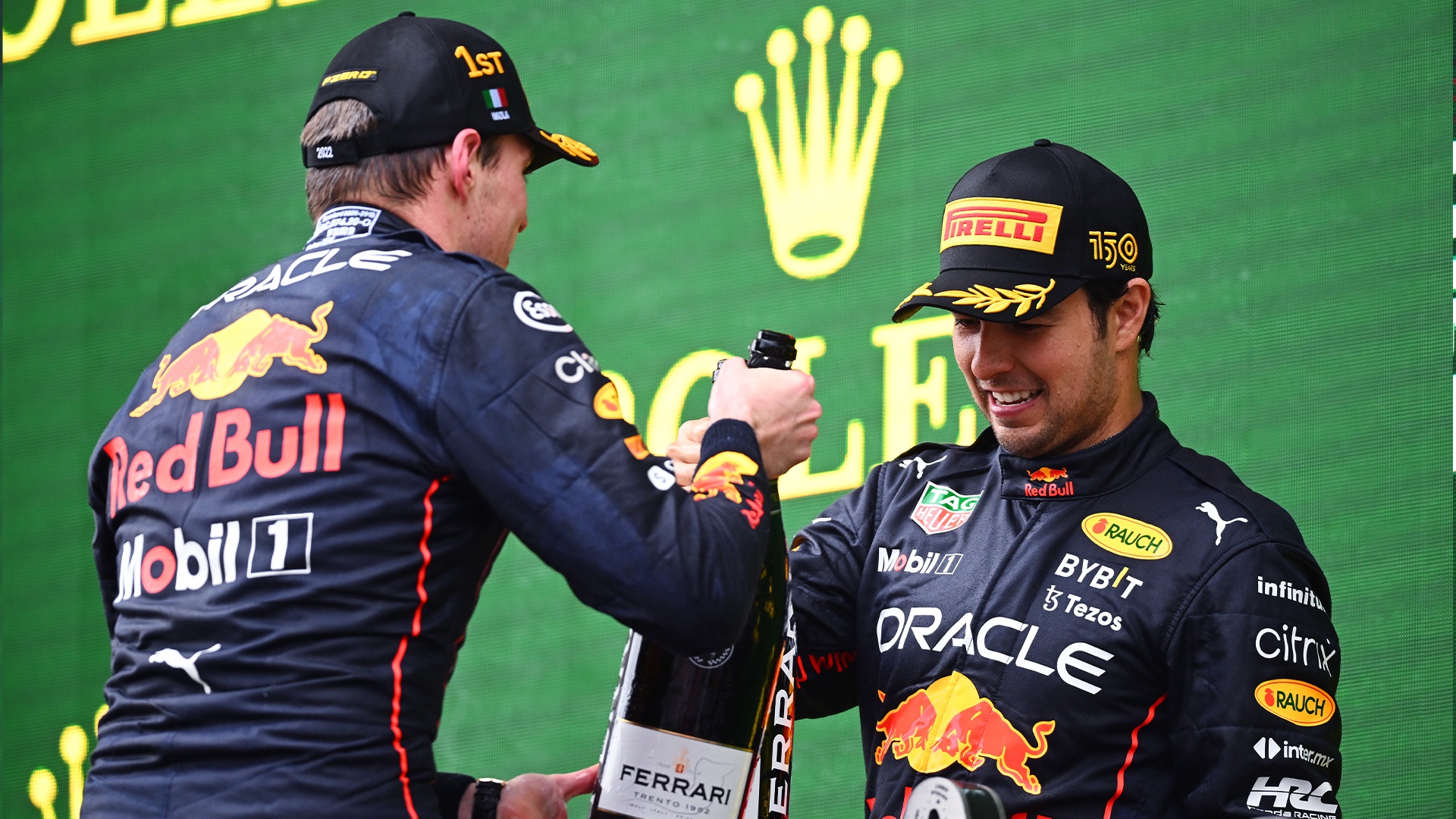 The most unexpected person on the podium today - McLaren driver Lando Norris.

He was able to get off to a great start, winning back two positions and drove in 3rd place for a while until he was overtaken by Ferrari driver Charles Leclerc. He rode the whole race in 4th place, only occasionally competing with Charles, but then at one point he became the third, why? Because of Charles Leclerc's mistake on the curb and the subsequent U-turn, as a result! He rolled back and finished only 6th. Lando Norris was able to conduct the race cleanly and gave the fans and the McLaren team a long-awaited podium!

"Of course the podium was a surprise. An amazing race, an amazing weekend. The team deserved this result after where we ended up in the first race. Great team work. Everyone has invested a lot of time and effort into this. I also like mixed conditions, I always perform well! A great weekend, hard work is bearing fruit” - Lando Norris (3rd). 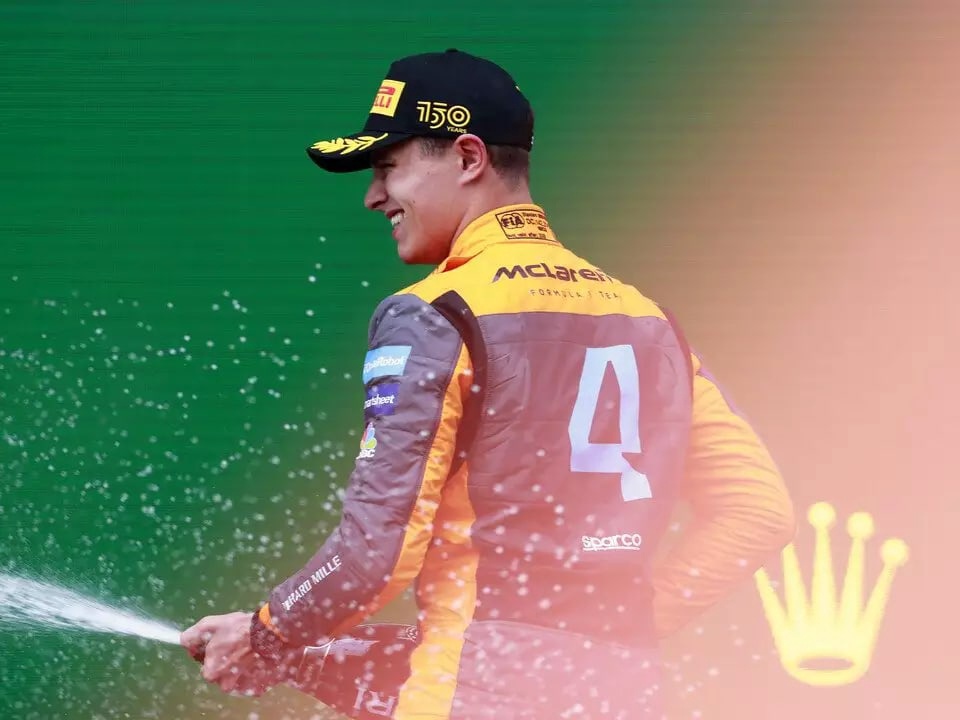 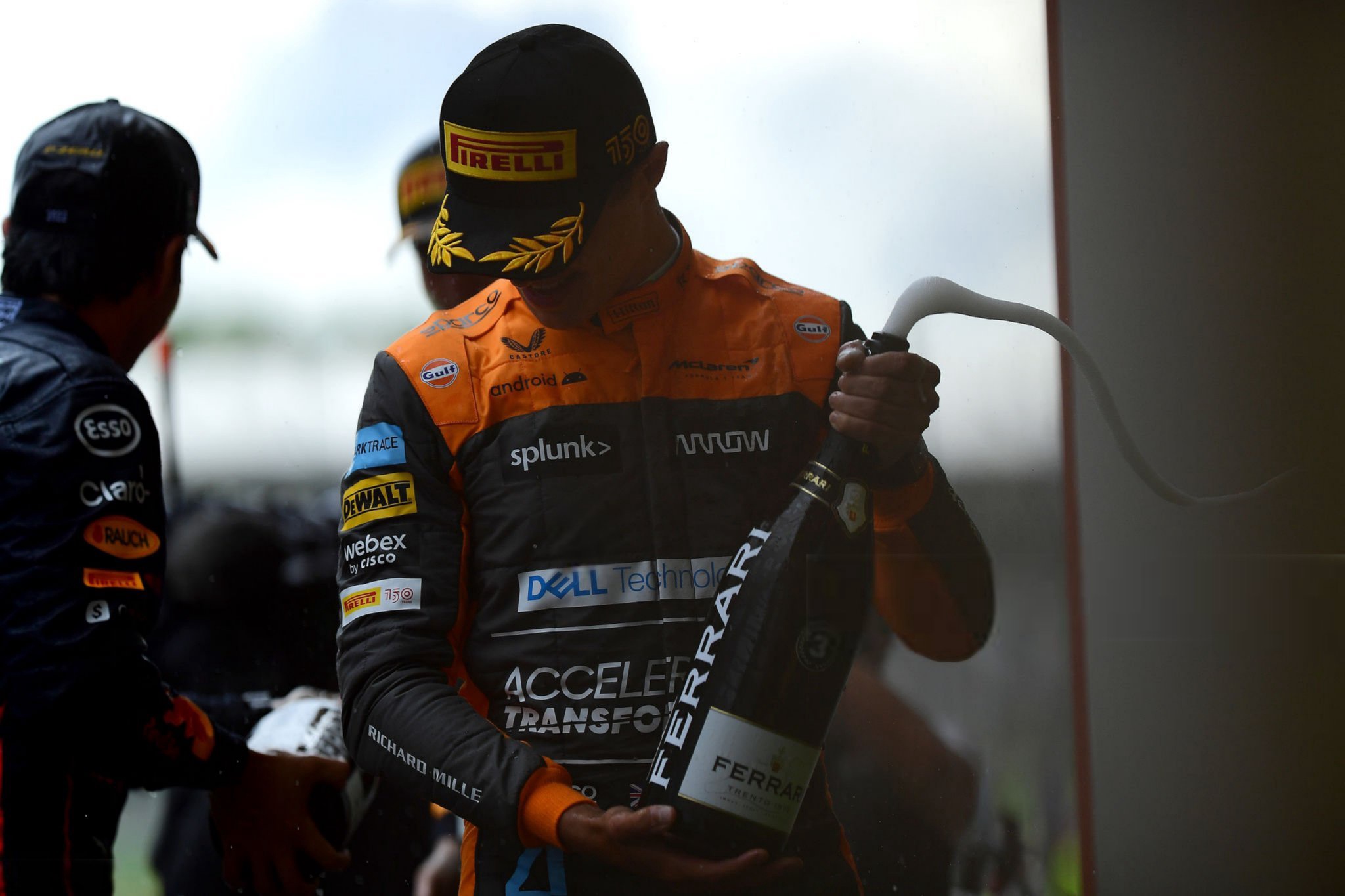 "This is not the result I wanted, it's a pity. Everything that happened after the U–turn is already details. Yes, this happens sometimes, but I'm sure I shouldn't have allowed a U-turn today.

Third place was the maximum for me – the speed of the car did not allow me to count on more, but I was greedy, wanted more and paid for it. I lost seven potential points. It's a shame, but this should not happen again.

It's hard to say why Red Bull were able to add this weekend. Time will tell what progress they managed to make, but there is no doubt that they were more competitive in Imola than in the first three races. We had the advantage in Bahrain and Australia, they were faster this weekend and Jeddah. The fight is very tight, and I think it will remain that way until the end of the season. That is why small mistakes lead to huge consequences. Today I lost seven points, but next time the losses may be higher, so you need to be careful” - Charles Leclerc (6th). 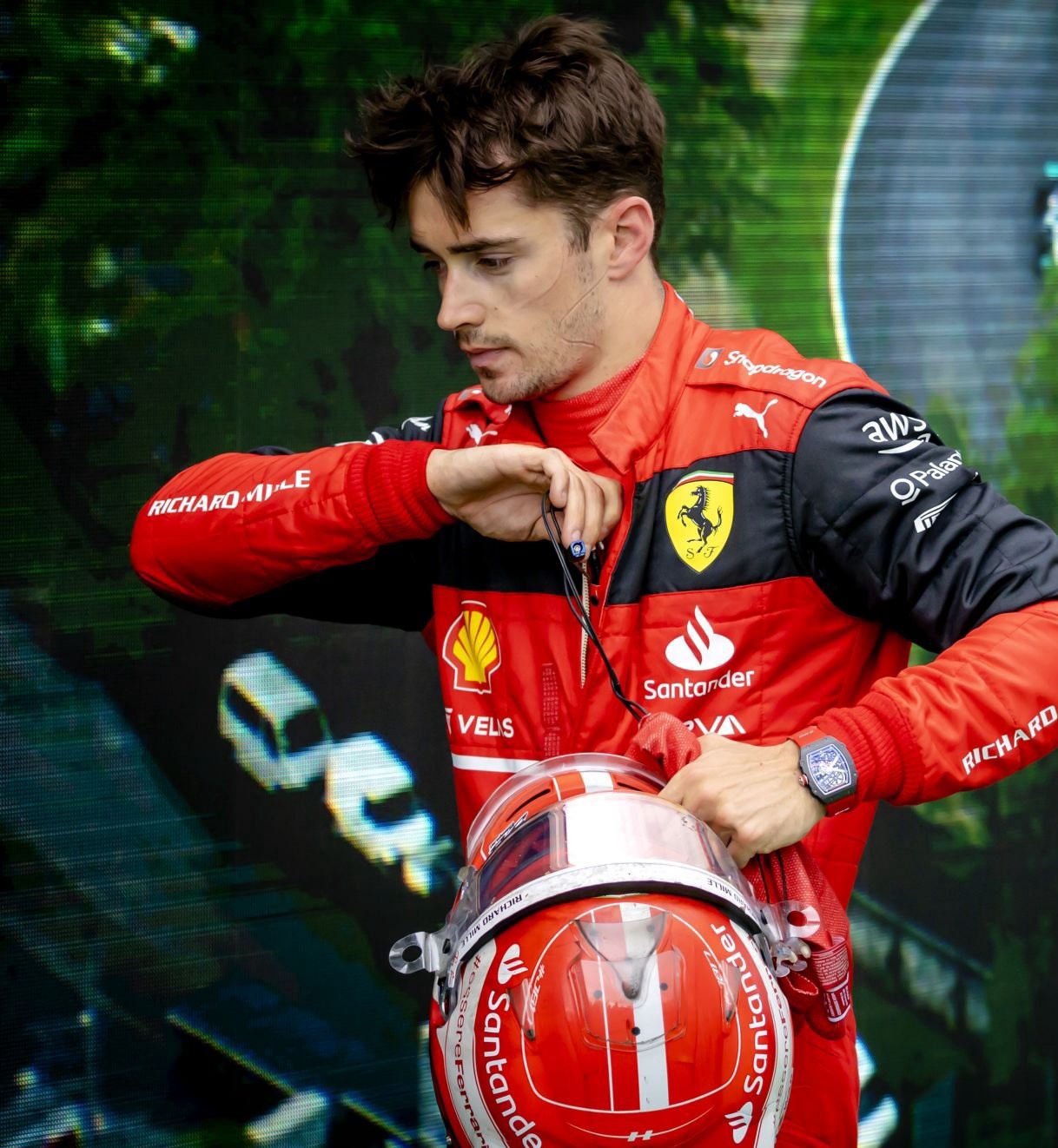 Lando Norris' teammate Daniel Ricciardo was unable to show a good result due to a collision with Carlos Sainz at the beginning of the race.

I knew that it would be very tight in the first corner, so I tried to provide myself with a little more space by driving on the curb. But as soon as I was on it, I just started sliding off it, and I was just sliding up, up, up, and at some point Carlos had to turn left to then turn right, and we just went into a turn, and obviously I hit the back of his car.

As soon as I crashed into him, I saw that he was turned around, and I just thought, "Yes, this is not fun." So, obviously, I messed up not only my race, but also his. I will review the records again to understand how I could avoid a collision. But I will definitely approach Carlos and apologize. An apology won't change anything, but at least for now it's all I can do" - Daniel Ricciardo (18th).

In the last laps, Bottas had many attempts to overtake Russell, but in the end overtaking never happened.

An incredible surprise was the 7th place of Alfa Tauri driver - Yuki Tsunoda.

He drove the whole race cleanly, so this is a really great result from him and the racer himself does not hide his joy!

"I am very happy with today, especially the fact that I scored points on our home track. A lot of people from the factory gathered in the stands today, I saw AlphaTauri flags flying every lap, and it gave me strength, so the glasses are a big thank you to all our employees. The pace of the car was really good, I didn't expect it to be so strong, but we progressed during the week and I'm happy with what we showed in the race" - Yuki Tsunoda.

"The team did a very good job today and we made the most of every opportunity to finish in eighth position. This is an important result for the team because they have worked so hard in a difficult season. It's clear that we benefited from the cool and humid conditions on Friday and Sunday, but we still needed to take advantage of the opportunities that came our way. We achieved this thanks to a good strategy, switching to slicks at the right moment. We may not have had a high net pace in this race, but we managed the tyres well and brought both cars into the points. It's nice to get to the start and score points, and now we're looking forward to Miami” - Sebastian Vettel (8th). 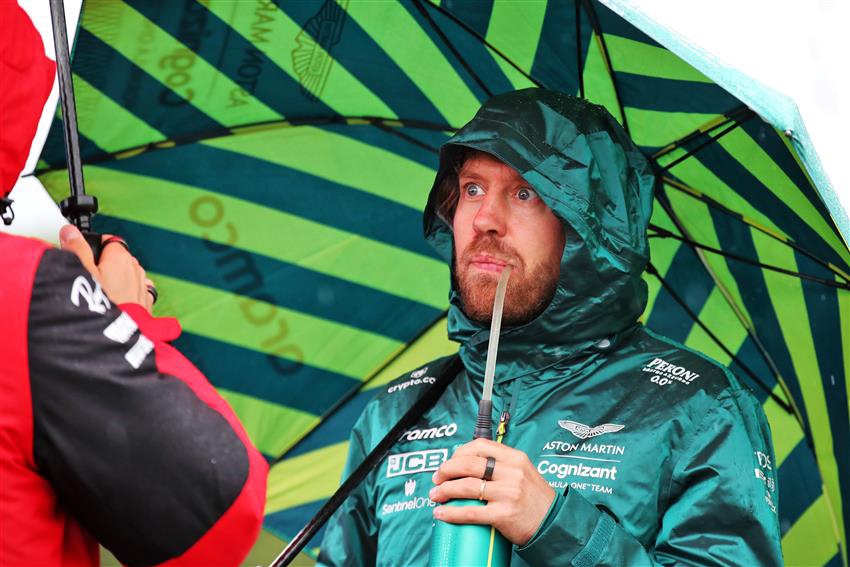 "It was a positive weekend for the team, and it's really nice to see both cars wearing glasses. I think I deserved to earn one point because I was under a lot of pressure in changeable conditions throughout the race. At the beginning of the race, many drivers around us had problems with overheating tires due to the drying track, but I was able to keep Lewis Hamilton behind, and also put pressure on Yuki Tsunoda. As soon as we switched to Medium tires, we continued to show a good pace and broke away from the group of cars behind us. I am glad that we performed better this weekend and used all the opportunities that presented themselves to us. Qualifying and the race were held in cool and humid conditions, which may have benefited us. We will enjoy today, but we will continue to achieve more in the next races" - Lance Stroll (10th).

And the last person who was able to compete for points was Haas driver Kevin Magnussen.

"Yesterday and today we were able to earn points – a decent weekend. When I qualified fourth, the expectations were even higher, but you have to be realistic.

At the beginning of the race on intermediate tires, I climbed to fifth place and drove at a good pace. When the track dried up, we were a little late with the transition to slicks, losing several places. I returned to the fight, fought for points – I earned two today and three over the weekend - a decent result” - Kevin Magnussen (9th). 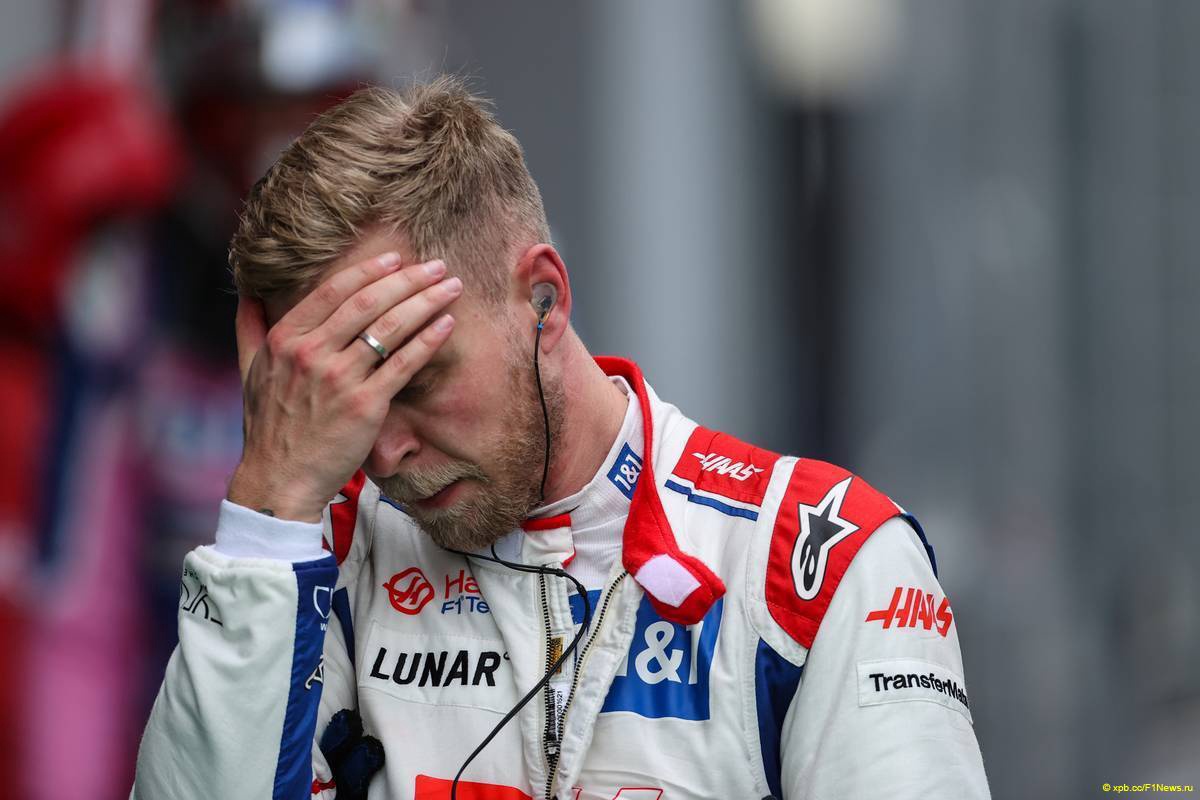 A very unexpected surprise was the 13th place of Mercedes driver Lewis Hamilton.

Previously fighting for victories and at least for podiums, Lewis does not hide his disappointment.

«It was a weekend to forget, that's for sure. I am out of the fight to win this season, without a doubt. There is no doubt about it, but I will still continue to work hard to try to somehow regain my former positions» - Lewis Hamilton (13th). 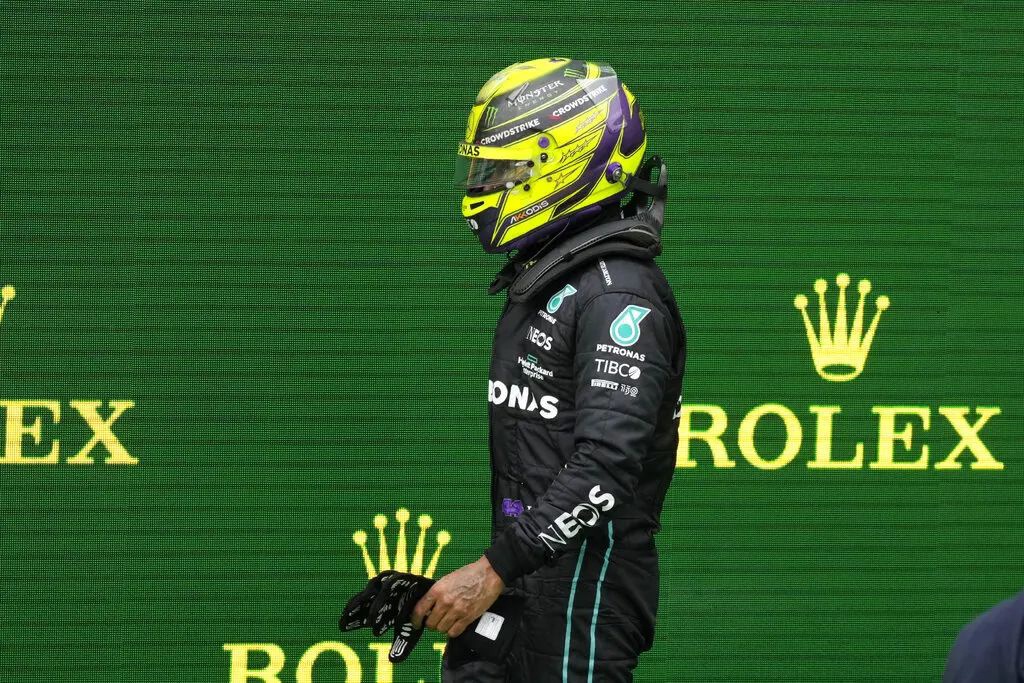 These were the last interesting moments that happened at the Emilia Romagna Grand Prix. Stay tuned with us!