An interesting turn of events: qualifying for the British Grand Prix

An unexpected driver in 10th place, an unexpected pole winner, what else surprised us in qualifying at Silverstone? 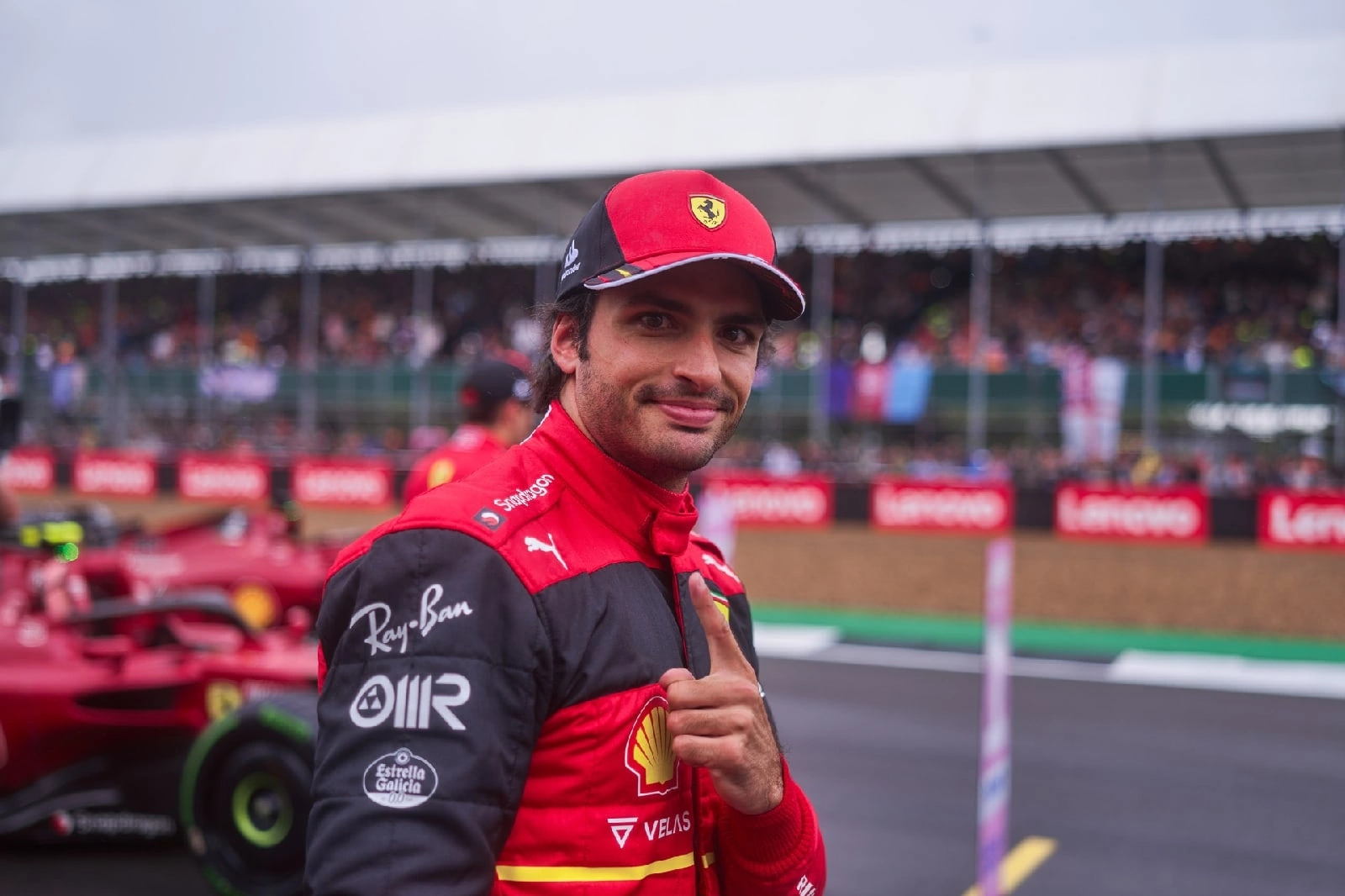 The British Grand Prix qualification took place yesterday and this qualification surprised us with unexpected results due to unusual weather: 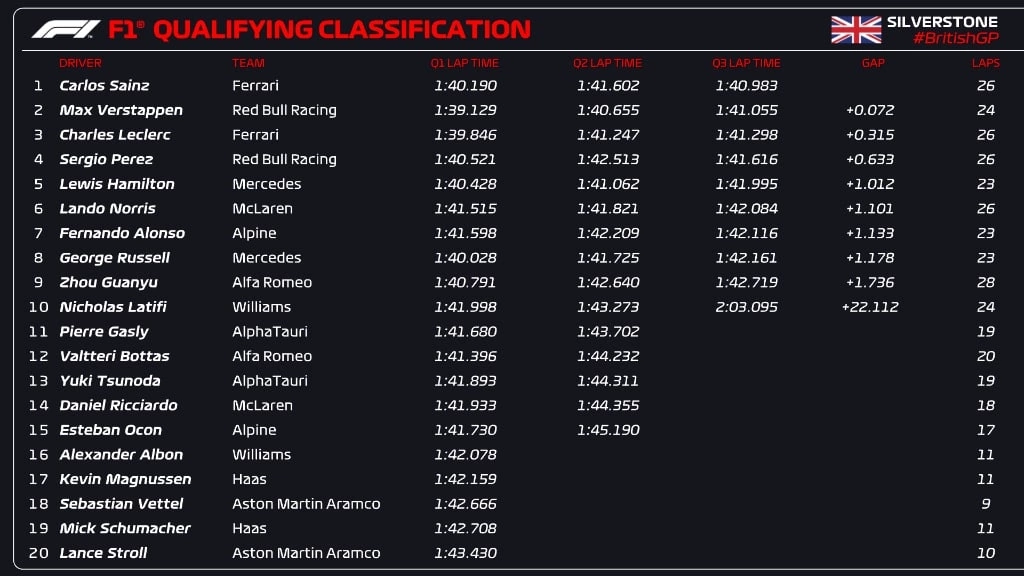 The fact is that during the first practice and during qualifying it was raining, because of which the risk of not entering the top ten was high and the usual fast drivers could not even drive a good lap, so in the first place we had a Ferrari driver and it’s not Charles Leclerc, it’s Carlos Sainz, who was able to surprise us with his first pole in his Formula 1 career. Congratulations! His teammate Charles Leclerc could not put a good lap and was only in third place.

Carlos Sainz (pole):  «Thanгks to all the fans for their support and for staying in the stands despite the rain!

I managed to drive a good lap, but on the inter tires I had serious problems with standing water. There was a lot of water on the trajectory – in such a situation it is easy to make a mistake and spoil the circle. In addition, it was not easy to maintain the operating temperature of the tires in such conditions.

At the end of the session, I managed to put a lap together – I won't say that I did anything special, but I got a pole, which was a little surprise for me.

Winning the race? I think we can compete for it, because we have speed throughout the weekend. Problems arose only in the third training session, but we solved them. Based on my pace in the second training session, that I have to hold my position. There is no doubt that Max and Charles will be under serious pressure, but I will do all my best». 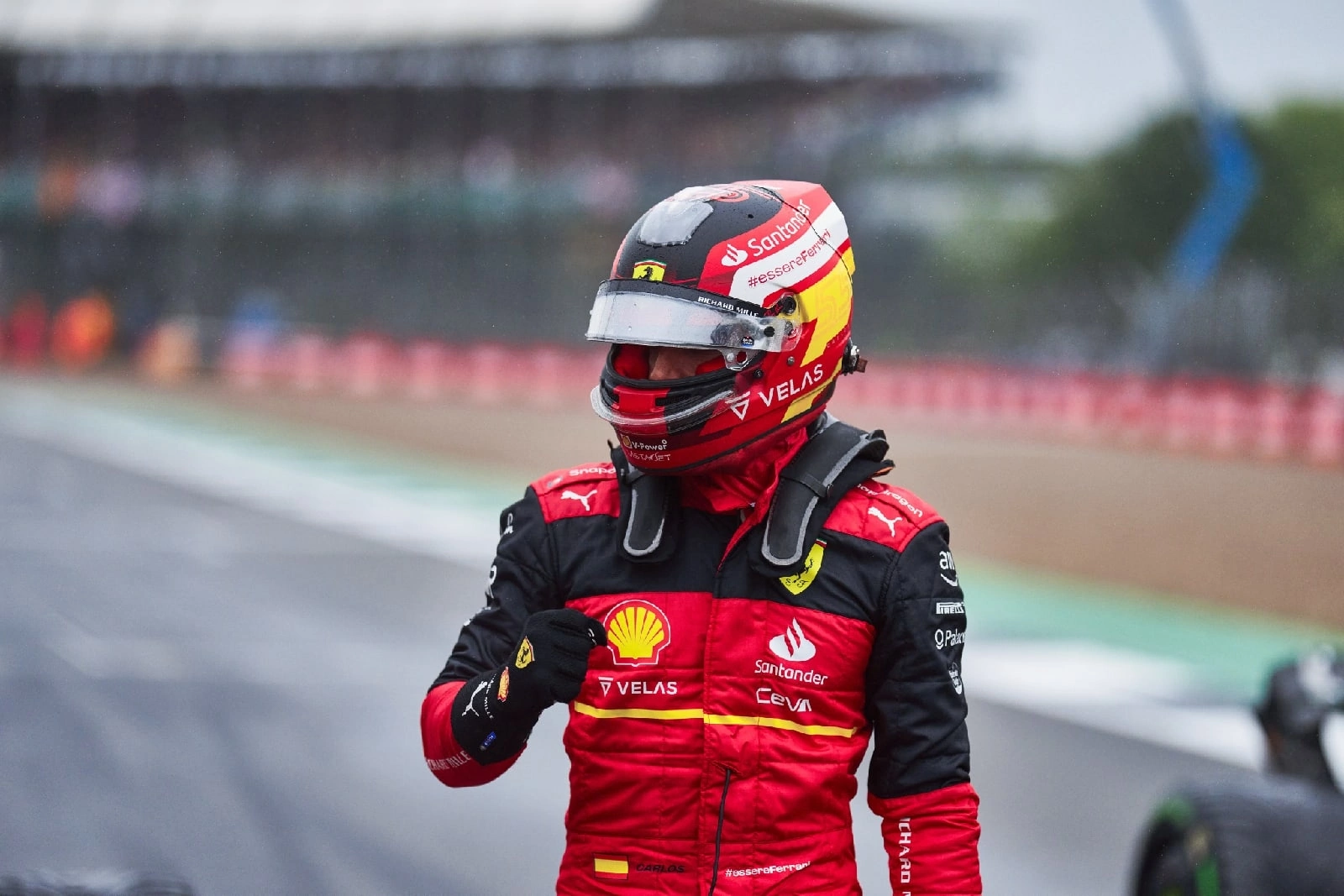 Charles Leclerc (3rd): «I'm disappointed with my result, but I'm happy for Carlos – he did a great job. I knew I had to do my best on the last lap, put everything together, but I made a U–turn - I didn't do my job, so I didn't deserve pole.

Third place is a good starting position in the race. I hope tomorrow I will be able to put everything together and win back». 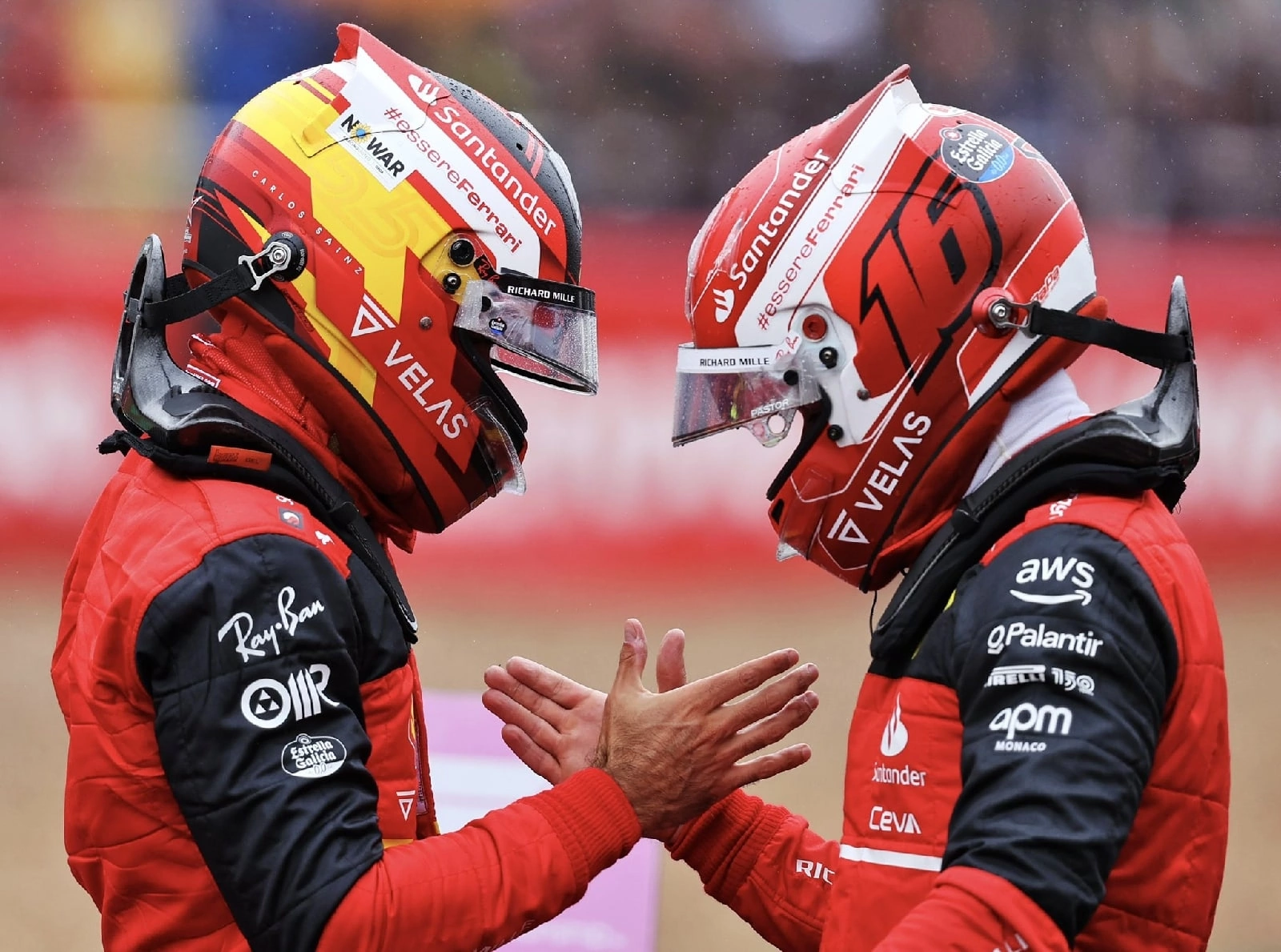 Max Verstappen showed the second result in the rain qualifying at Silverstone, but he is not particularly worried about missing the pole, believing that the car will allow him to fight for victory. His teammate Checo Perez showed only the fourth time.

Max Verstappen (2nd): «Qualifying was not easy because of the rain, which then intensified, then the asphalt began to dry up, so it was necessary to choose the right moment to go on the track. But in general, the car worked very well, although the qualifying final becomes like a lottery when you have to drive a lap as fast as possible.

Unfortunately, yellow flags appeared on the track on my last lap, but still we start from the front row, and this is a great result for us. Moreover, in racing, our car is equally good on a wet track and on a dry one.

If we talk about the start, then, in my opinion, the fate of the Grand Prix is not decided on the first lap, and we need to spend the whole race well, besides, it will be important to work properly with rubber during the course of the race, so we will prepare for tomorrow». 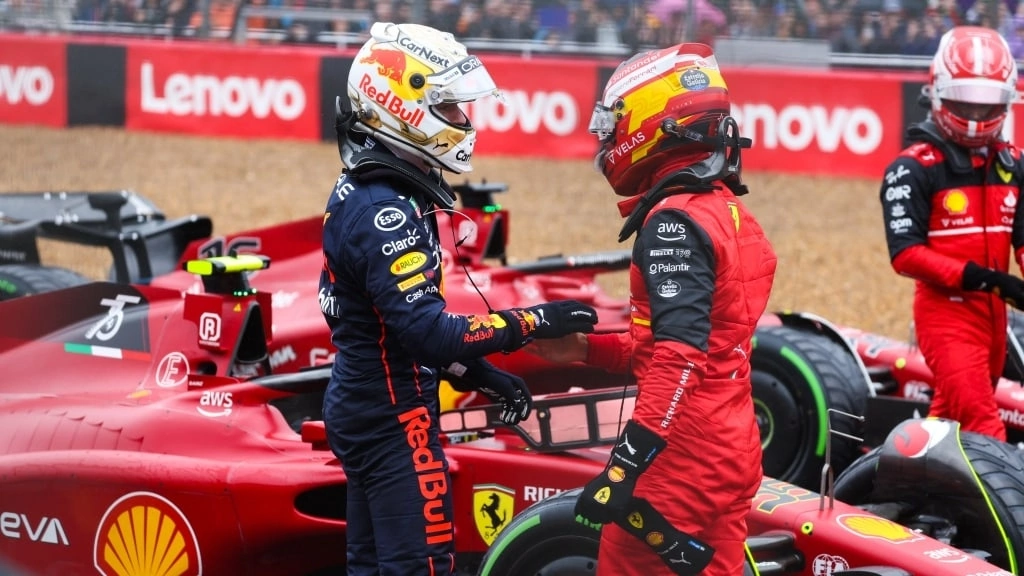 Sergio Perez (4th): "Good result in changeable weather conditions. Of course, I wanted more, so I don't feel completely satisfied, but we can fight. The result is not perfect, but I am not too upset, because in the final on the last two laps I was prevented – perhaps I would have taken a higher position if not for that.

We have found out the cause of the problems that interfered on Friday, so we will be more competitive in the race. Tomorrow it is important to show a high pace and stay in the fight – then everything can change. We have made progress, and I am sure that we will make life difficult for Ferrari. It won't be easy, but we will fight”. 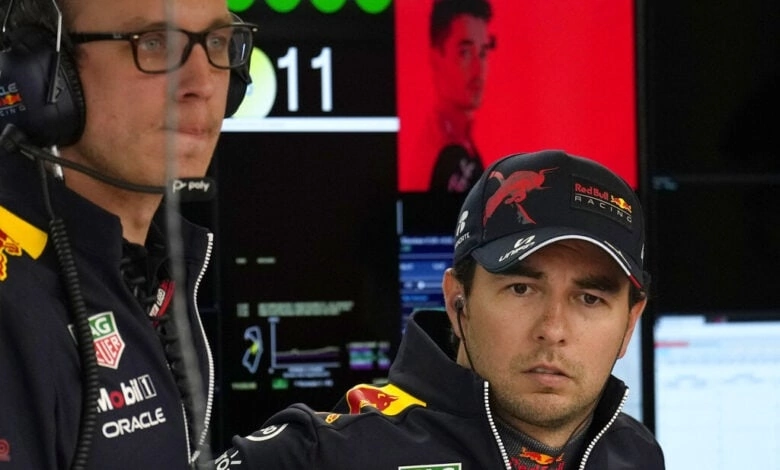 The fifth place was shown by Mercedes driver Lewis Hamilton. After qualifying, he admitted that he expected to fight for a higher result than the 5th starting position on his home track at Silverstone, but promised to do everything to recoup in the race. His teammate George Russell on his home track in qualifying showed only the eighth result.

Lewis Hamilton (5th): «I don't know who said that we could excel at Silverstone, but I know that the whole team worked very hard to prepare the car, and we brought a number of new elements here, although it can't be called a large-scale update.

But in any case, we have made improvements, somewhat reducing the gap from the leaders. Although we would not have claimed high results on a dry track, but qualifying took place in the rain, and today we had some chances. In these conditions, the speeds are lower, so the swing is less pronounced.

If we talk about the race, then in yesterday's training our pace on long series of laps was better than short ones, although the car still does not cope with slow turns in the best way. It will not be easy to claim a high result when starting from the fifth position, but I will try to break forward, especially since the fans support us so much.

To be honest, today I expected to compete for the first three positions and thought I could show the second result, but I was only fifth. This complicates the task for tomorrow, but we will still do everything in our power». 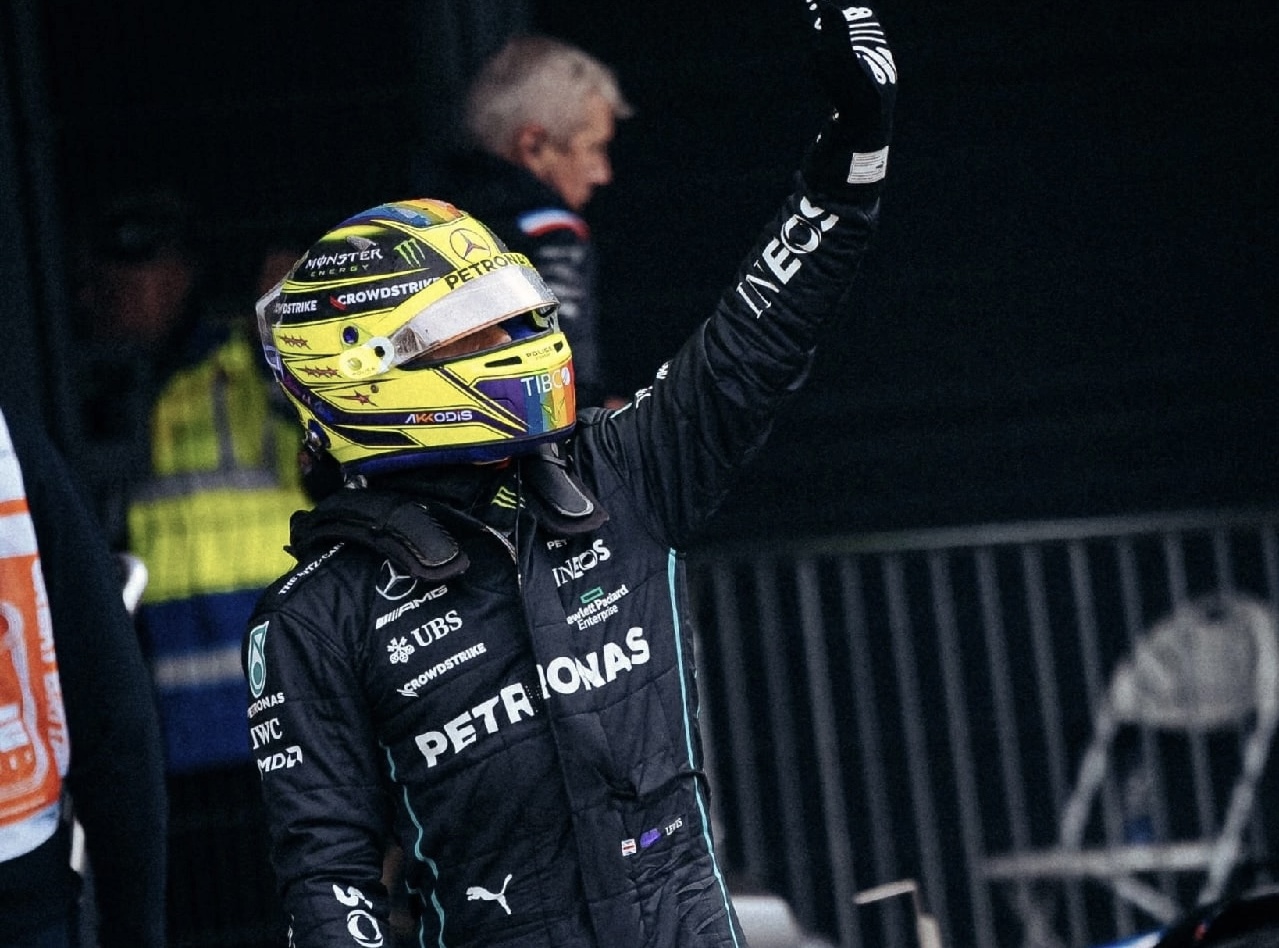 George Russell (8th): «The situation gradually worsened during qualifying. In the first session I was confident in myself and was consistently in the top three, and in the final, when it mattered, I could not achieve the maximum.

Today the car allowed me to show the fourth or fifth time, but at the key moment I made a mistake on a fast lap». 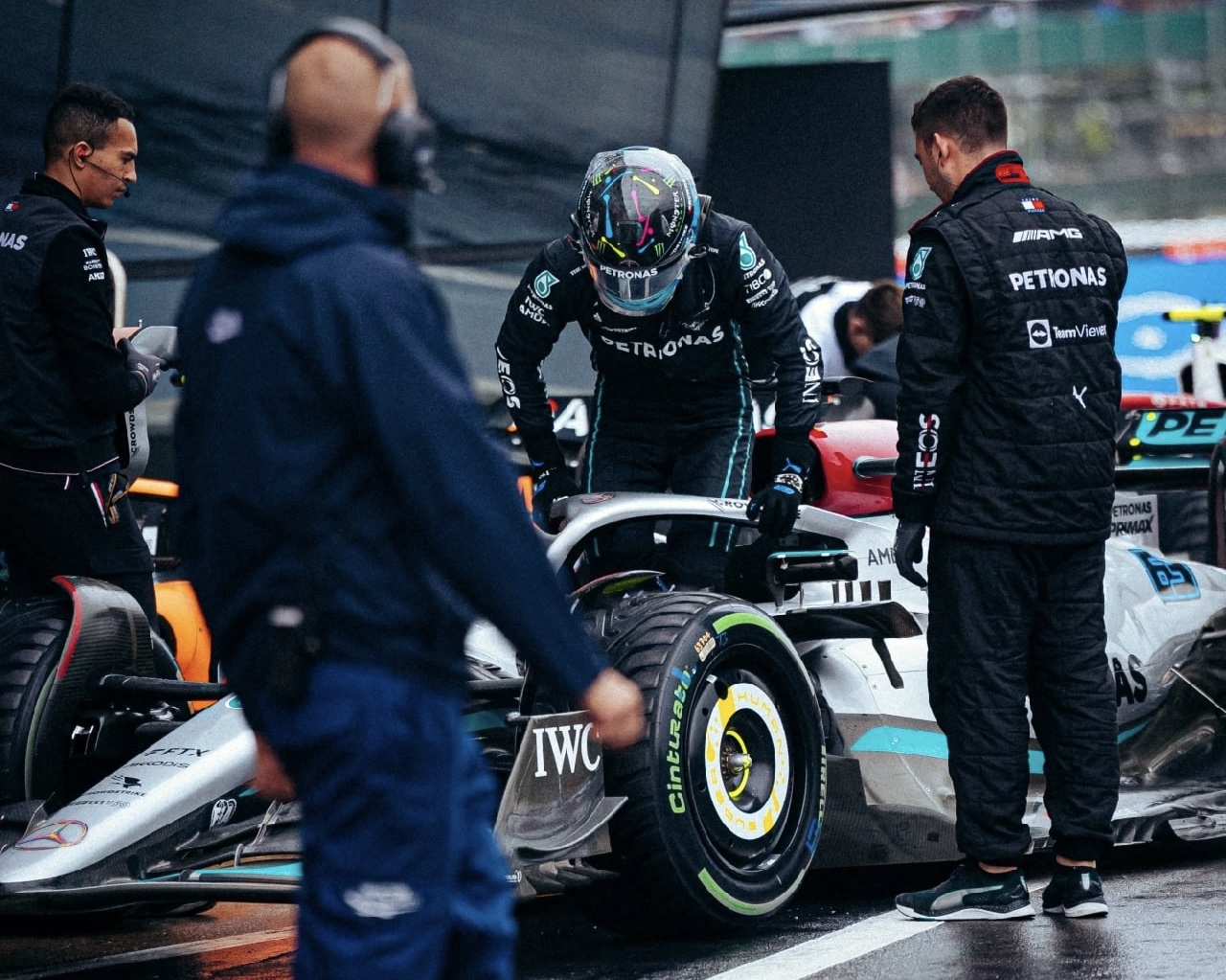 Lando Norris was able to surprise the fans on his home track by showing the sixth result in qualifying! His teammate Daniel Ricciardo could not do anything and found himself out of the top ten again, in 14th place.

Lando Norris (6th): "I'm very happy. The 6th position is the maximum that could be counted on today. True, we can say that I did not drive my last lap in the best way, but I was still pleased with the result, the team did a good job.

I did a good job, too, including because I went to the track exactly when I needed to, and we were ahead of at least one of the cars that are definitely faster than ours. This is a good starting position, and I hope that during the race I will be able to keep it”. 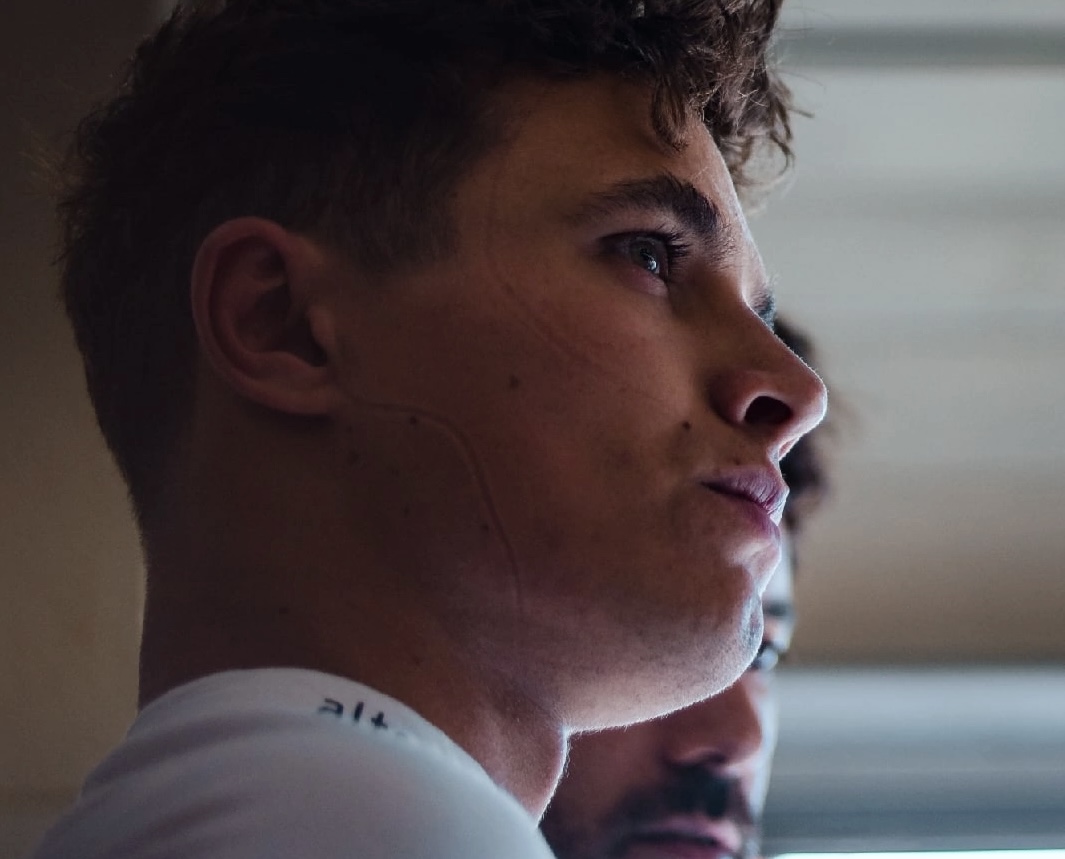 At Silverstone, Fernando Alonso reached the qualifying final for the fourth time in a row and showed the seventh time. After the session, the Alpine driver stated that the result on a wet track could be higher. His teammate Esteban Ocon qualified fifteenth due to battery problems.

Fernando Alonso (7th): "Today the result could have been higher. Unfortunately, I didn't manage to squeeze everything out of the car in the final. In the final, I was the first to start a fast lap – it turned out to be good, but I started the last fast lap with an almost completely discharged battery, so I could not unleash the full potential of the car. I feel like I could have qualified in the top five.

We don't know if it's going to rain tomorrow or not – we'll see if we can get the most out of the starting position and earn points. The car handled well on a wet track, and the data collected shows that we made a good step forward this weekend thanks to the new products”. 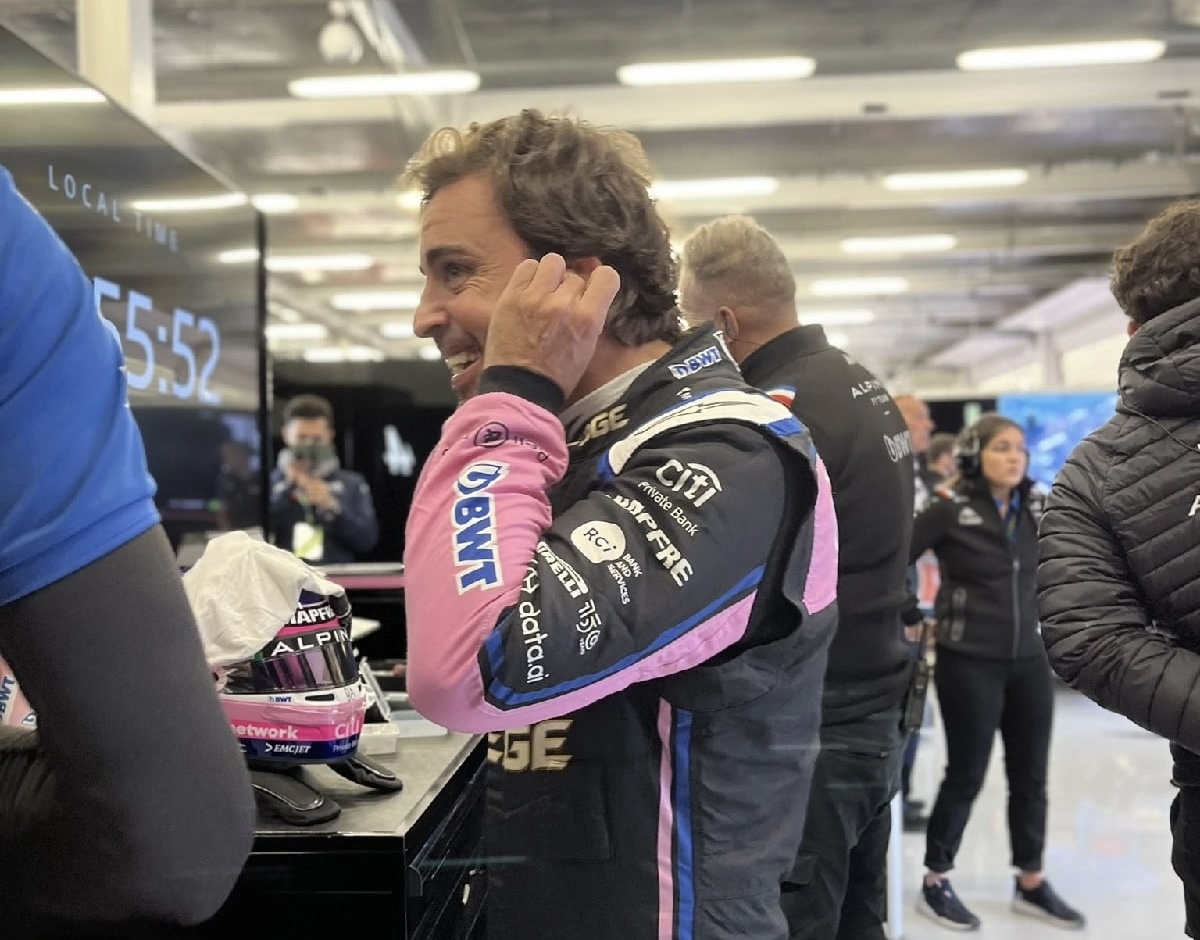 And now we are smoothly moving on to the heroes of this qualification.

The Alfa Romeo driver is in 9th place and this is again not the one you thought about, Zhou Guanyu was able to surprise his fans with the 9th place, when his partner Valtteri Bottas was able to show only the 12th time.

Guanyu Zhou (9th): "The qualification turned out to be difficult, but for a beginner I did not perform so badly! On Saturday, the conditions were different from yesterday, but I was confident and improved with each lap.

It was especially difficult between the second and third part of qualifying, when there was a lot of standing water, but I was able to keep the car on the track, make the most of everything I had – and I can be satisfied with the work done.

It's very nice to qualify for the finals twice in a row, I'm growing and progressing – and I'm very happy about it. I'm looking forward to tomorrow, the race should take place on a dry track, I have the opportunity to earn a few points – this is the main goal”. 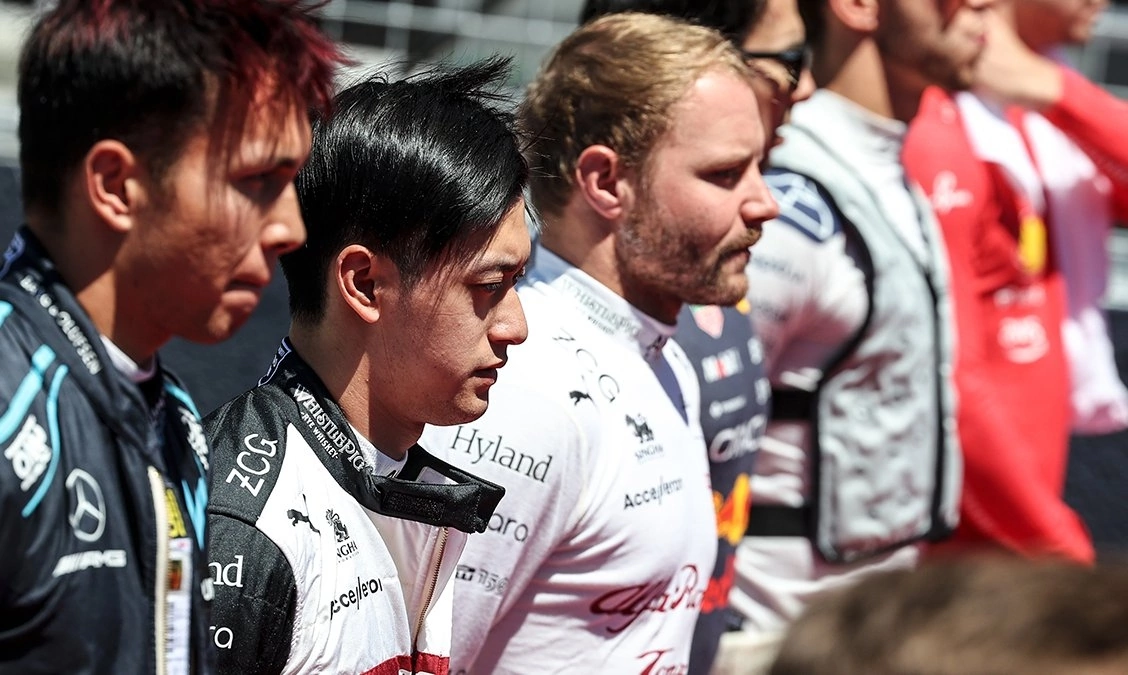 And finally, an absolutely unexpected driver is in 10th place and this is Nicholas Latifi!

In the rain at Silverstone, Williams driver Nicholas Latifi reached the qualifying final for the first time in his career and starts the race tenth. His partner Alex Albon on the updated car showed the sixteenth time.

Nicholas Latifi (10th): «Today is a special day for me, which took place in difficult weather conditions. Reaching the second part was already a great achievement, which gave me acceleration, and reaching the final was even more than we had hoped.

I was able to find a rhythm right after leaving the pits. The team did a great job in the first and second parts, letting me out on the track at the right moments. We saw how important it was in the second session to show the time at the right moment – before the condition of the track got worse. It's a pity that we didn't manage to compete in the final, but, in general, the team did a great job – a pleasant day!

We have to be realistic about our chances in the race, because faster cars will start behind us. In the race, you need to apply a strategic approach, because a lot will depend on the control of rubber wear. Anything is possible, so I will focus on my own race and try to make the most of the opportunities that I may have». 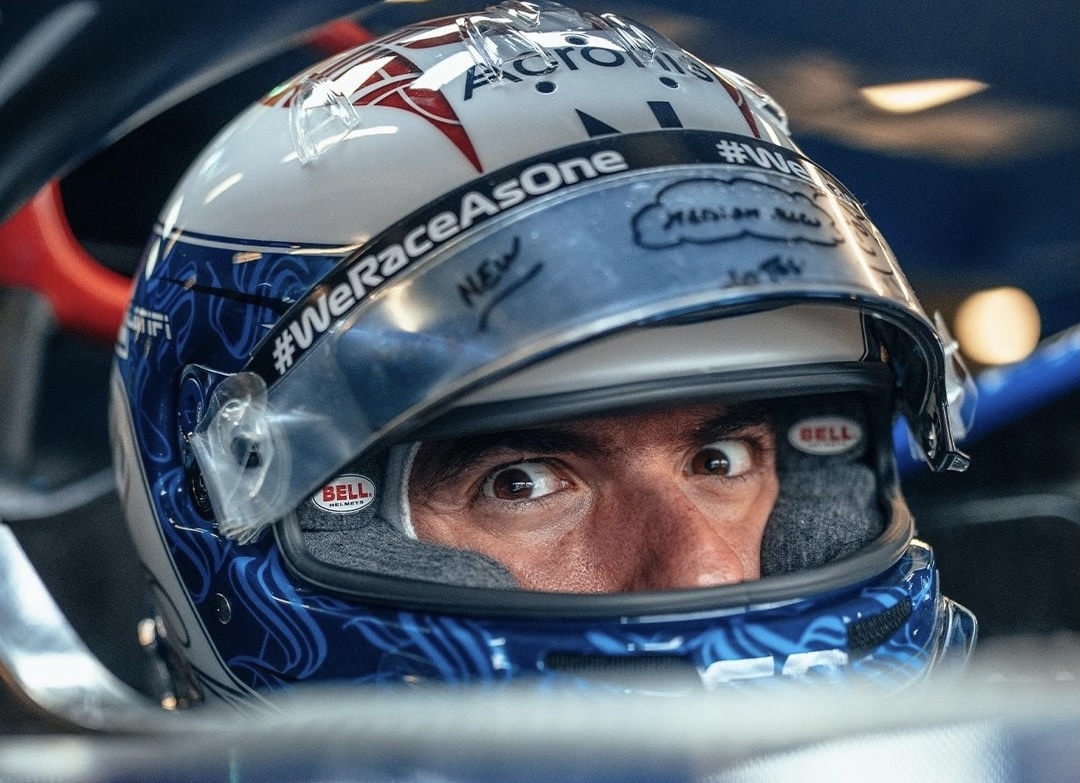 That was such an interesting qualification, and follow the results of the race with us!