The conclusion of the Formula 1 summer break gives us a first opportunity in four weeks to see new tech parts from the teams. Though a number of the changes on display in the Spa pitlane are track-specific, Mercedes and McLaren in particular have brought a wider array of new parts for the Belgian Grand Prix weekend. 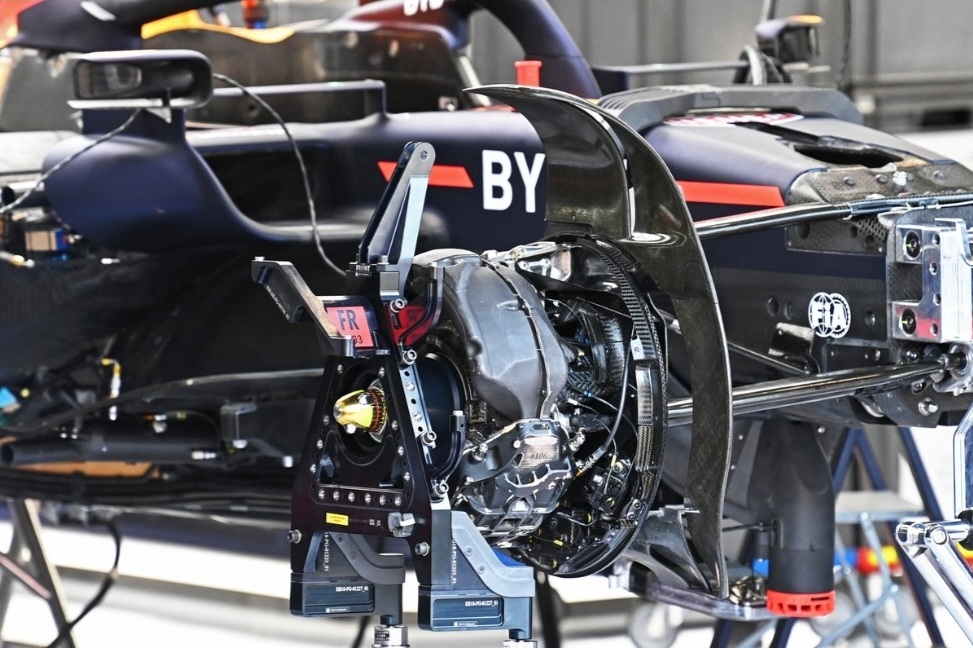 The conclusion of the Formula 1 summer break gives us a first opportunity in four weeks to see new tech parts from the teams.

Though a number of the changes on display in the Spa pitlane are track-specific, Mercedes and McLaren in particular have brought a wider array of new parts for the Belgian Grand Prix weekend.

Mercedes has arrived with a mix of development tweaks and a Spa-specific rear wing. The front wing endplates are reprofiled as they transition into the flaps to give a more aero-efficient creation of downforce, reducing drag. 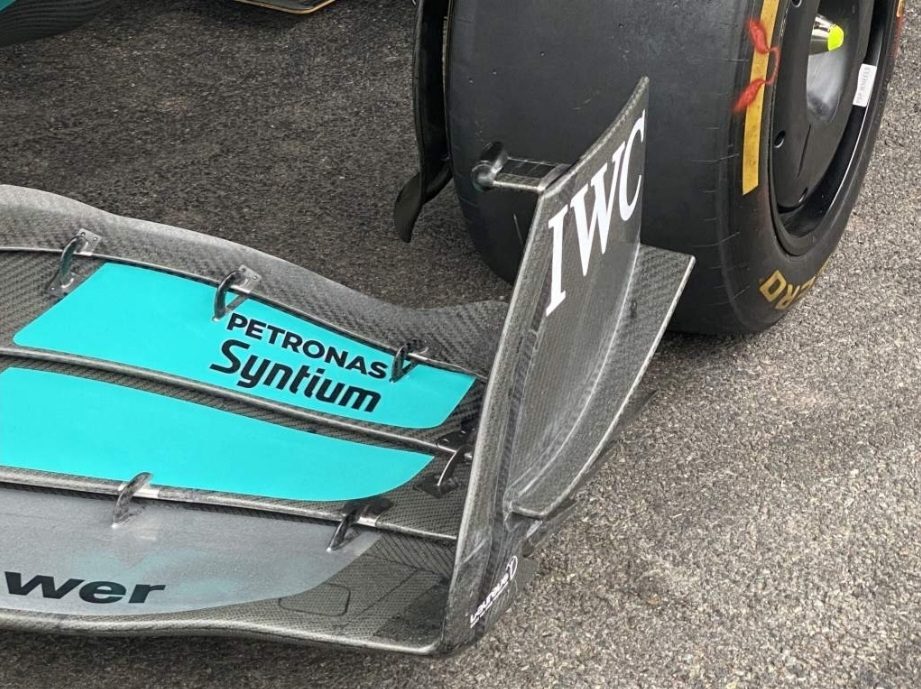 The floor fences have been re-aligned to match the changes made to the floor further back. These concern a reduction in the exposed area of rear floor which reduces downforce directly created there but improves the flow to the diffuser for a net gain in downforce. 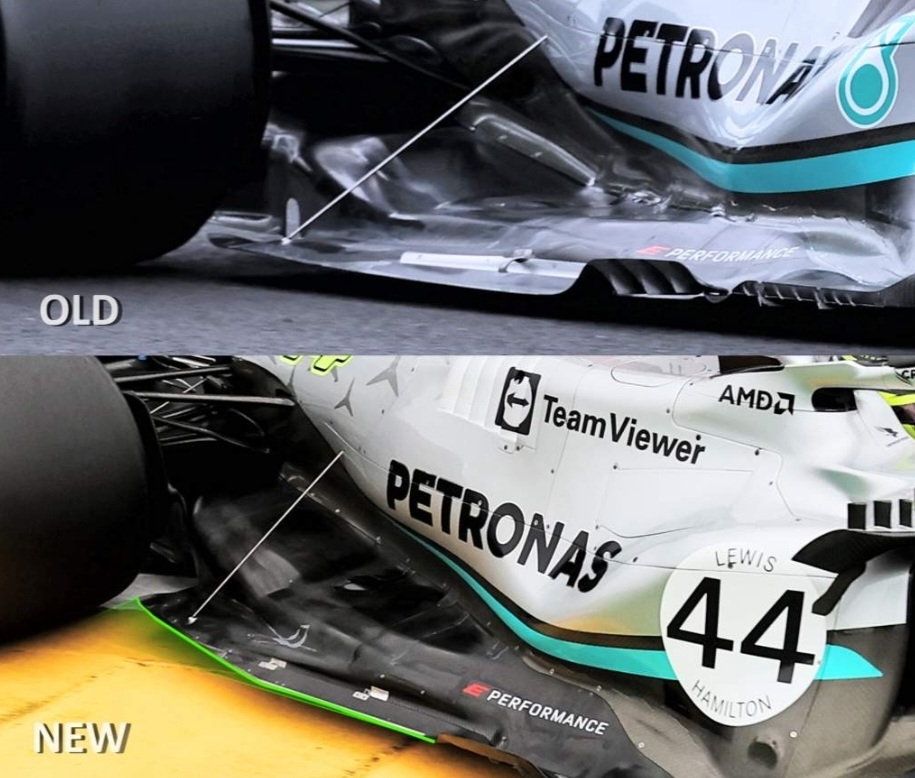 Mercedes was also, like every team, experimenting with its rear wing levels on Friday.

In this picture of the W13’s rear wing we’re able to see the base layout of the endplate’s upper cutout and another section of bodywork that overlaps the existing surface. That modular solution helps with the cost cap exercise of building parts as multiple designs can be deployed with the same endplate. 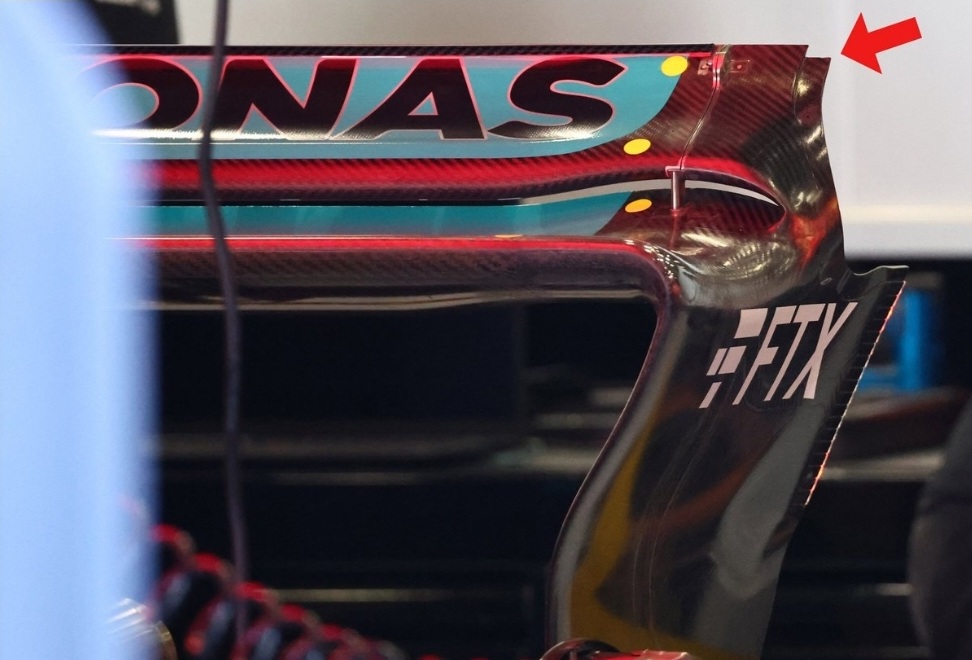 Spa is one of the most difficult circuits to set your aerodynamic compromise. The first section is all about top speed, the middle section is about downforce and the third section is about straightline speed. Add to that a bit of inclement weather and it really is a coin toss to decide.

Small tweaks for Red Bull with a modified sidepod profile to give the most aero efficient cooling capacity for the demands of Spa. The lower rear suspension wishbone has been shrouded differently to reduce drag. 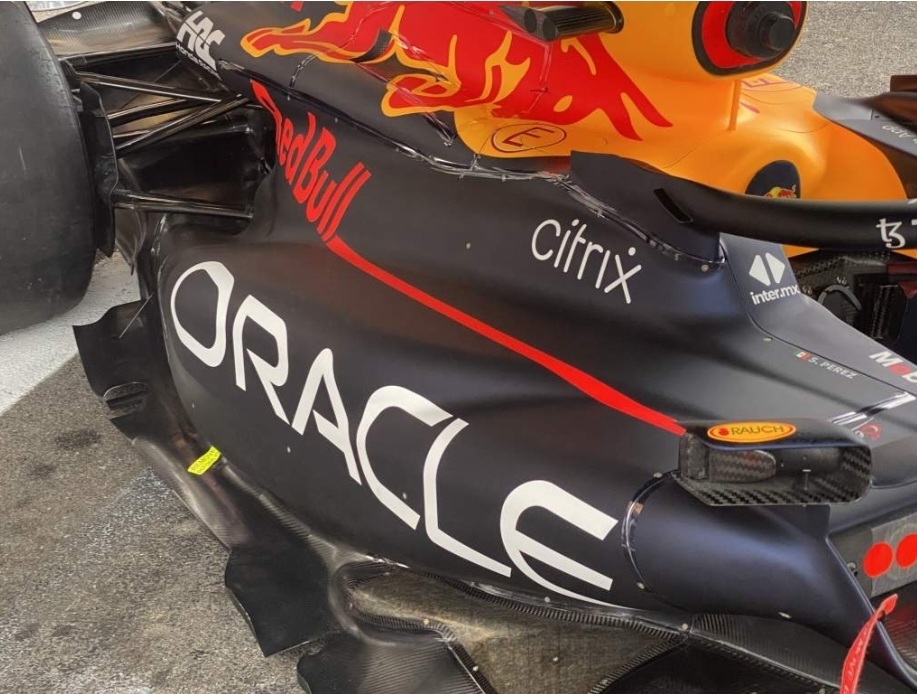 Red Bull may have lower downforce options available to test for the weekend, which may include the removal of the upper beam wing element, which it has already done at several circuits this season that require less downforce

Spa-specific reduction in the area of the rear wing and the accompanying lower beam wing.

It has been bitten a few times this year by running too much downforce, and with it drag. Yes, it meant the car could do a good laptime but it left Ferrari vulnerable in the race.

Ferrari made a complete assembly change between FP1 and FP2, as opposed to trimming the rear flap as Mercedes did. So it was more prepared for this change than Mercedes was.

Perhaps this was because, after engine penalties, Leclerc will be starting towards the back of the grid so will have a lot of overtaking to do before he can get to the podium. It’s going to be interesting to see him and Max Verstappen, who also starts at the back with engine penalties, fight their way through.

The weather could play a big role in who has made the correct decision on wing levels. But to know who has got it right or wrong, we will need to wait until the chequered flag falls on Sunday.

A significant range of upgrades on the McLaren here. There are circuit-specific changes to the rear wing (a choice of two), beam wing, rear brake duct bodywork and cooling louvres. 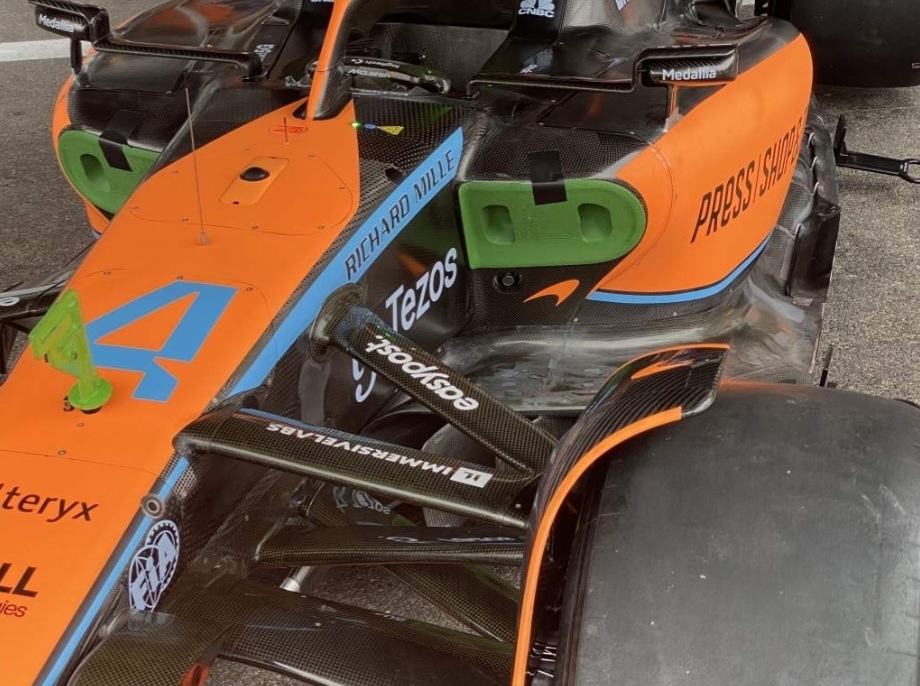 McLaren has also opted to trim the upper flap of the MCL36’s rear wing but, like Alfa Romeo, it has chosen to leave a section in the centre untouched so it can deploy its regular DRS mechanism. 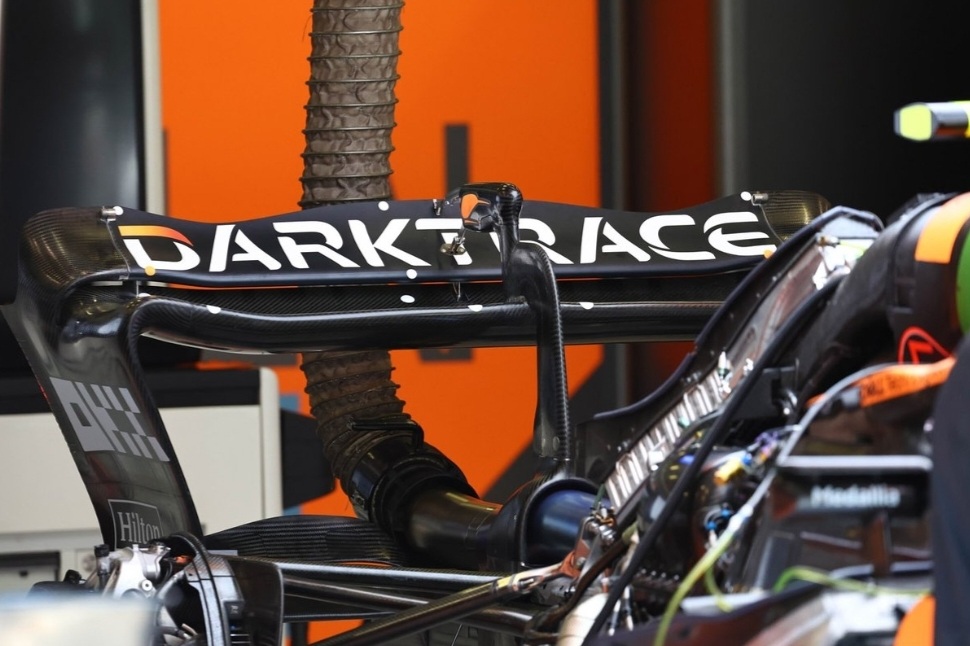 Alpine’s low downforce offering is one we’ve seen before. The team ran this extreme wing at Baku, topping the race speed trap at 332km/h with Fernando Alonso. 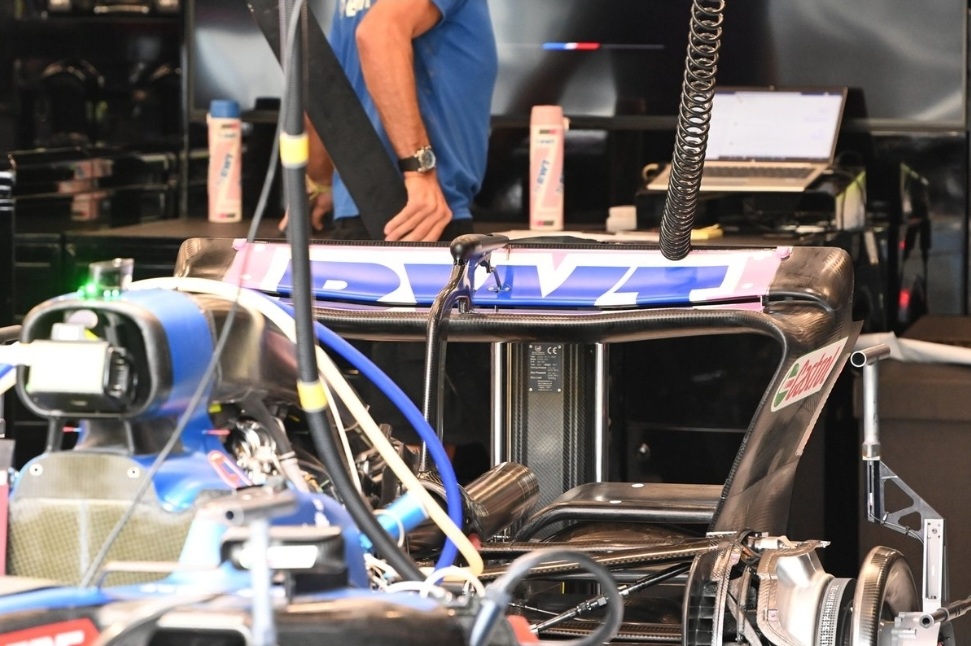 As the A522 is prepared we’re able to spot some of the internal detail of its front brake assembly, with the team preferring to mount the caliper in the front and use teardrop shaped outlets in line with the disc to help manage temperature exchange. We can also see how the team is treating heat management under the brake drum at the rear of the car. 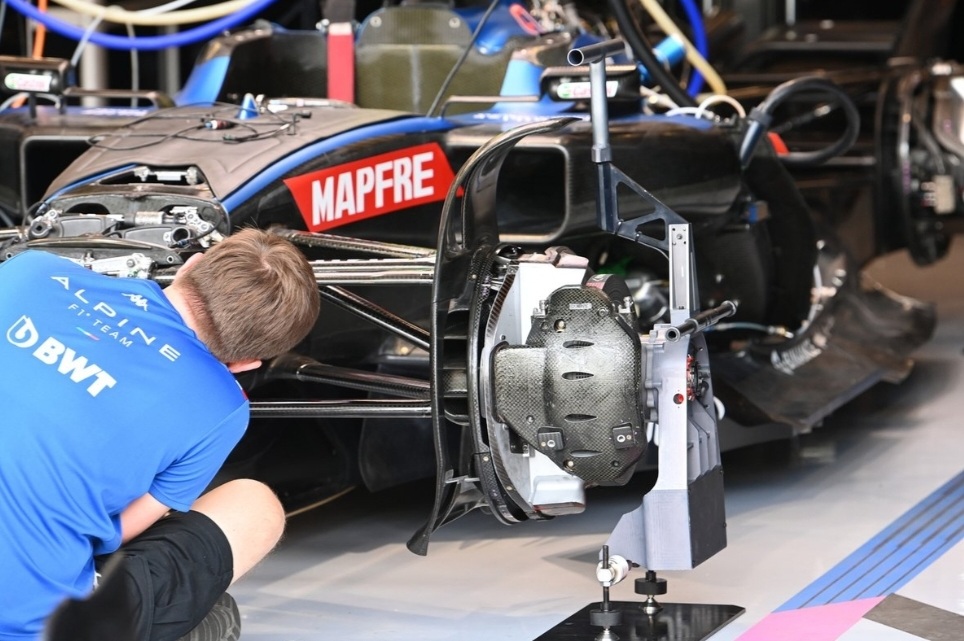 As an Alpine mechanic works at the front of one of the A522’s, we’re not only treated to a view of some of the inboard suspension elements but also the bib wing introduced earlier in the season. 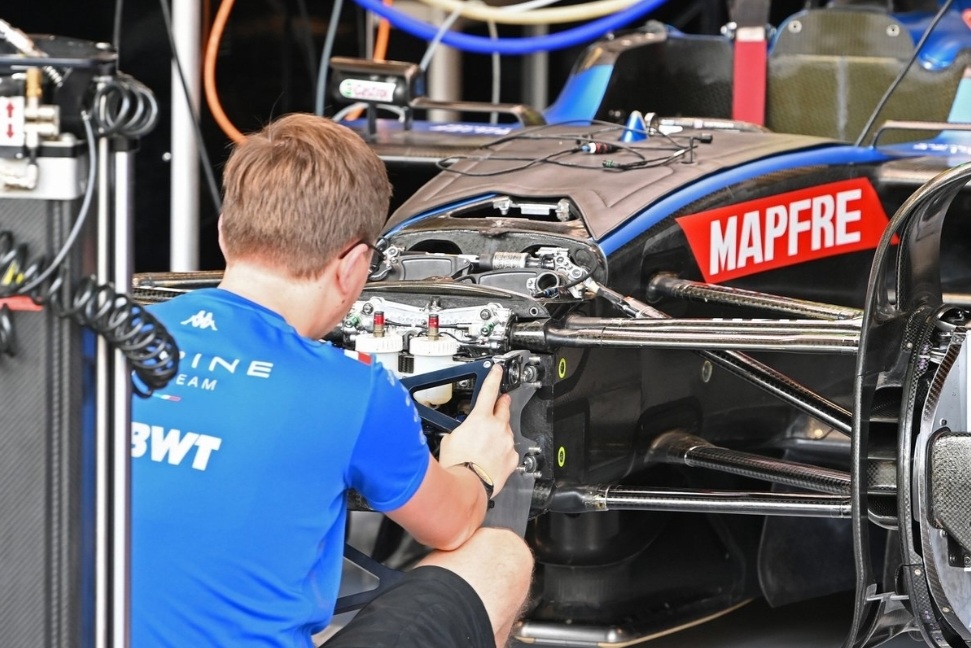 AlphaTauri continues to make changes to the AT03’s floor edge wing and the edge of the floor too. Note the U-shaped mounting used to bridge the gap between the two and the upwardly rolled edge of the floor, which is then cut away into a taper towards the rear tyre. 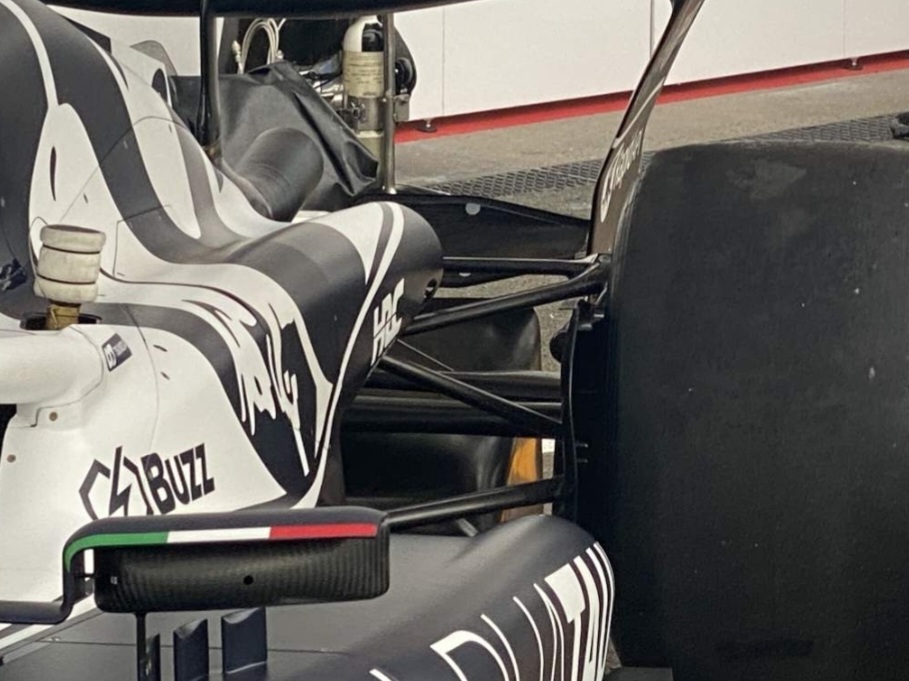 As well as a Spa-specific rear wing and beam wing, the AlphaTauri also features extra winglets on the rear brake ducts and the angle of the rear lower wishbone shroud has been altered for optimum flow to the Spa rear wing. 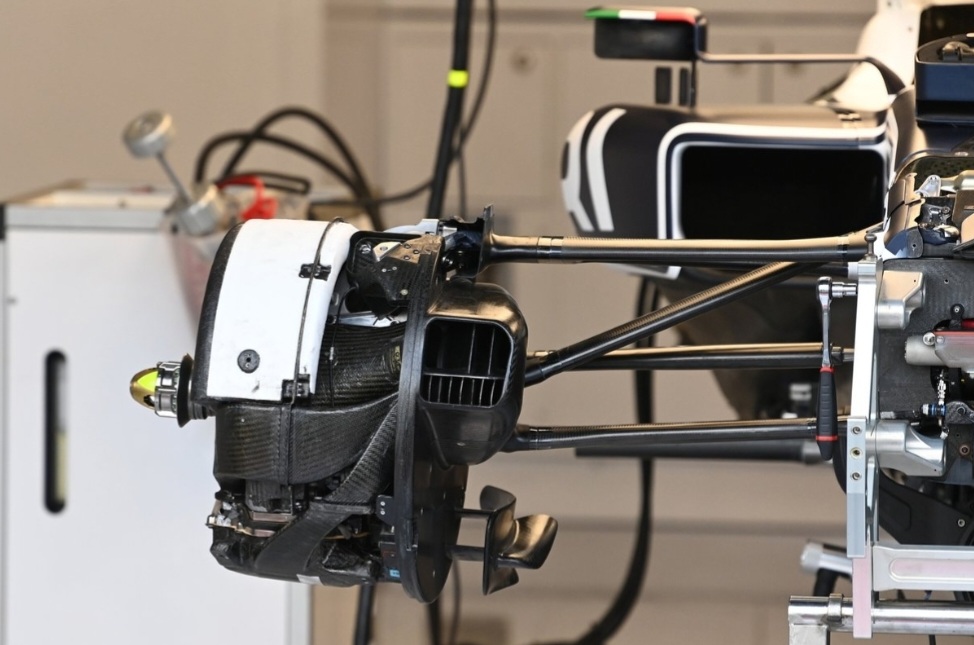 AlphaTauri’s rear wing offering notably features no trailing edge Gurney flap, as the team favours to take advantage of the drag reduction that removing it might offer 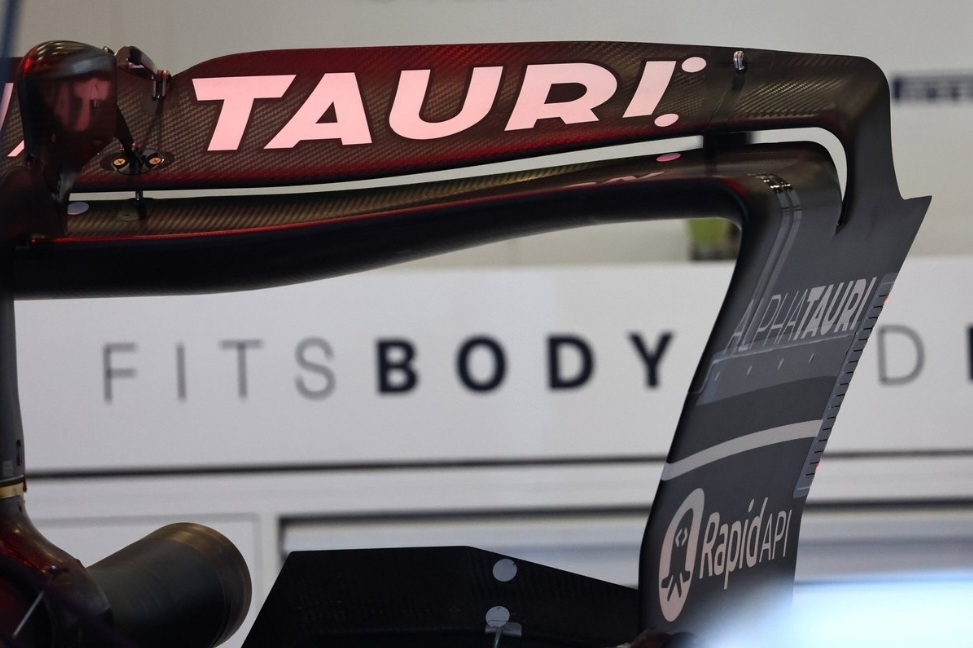 Aston Martin will utilise a lower downforce spoon ashaped rear wing, a solution that the team has employed before at other high speed venues. You’ll note the two circular access panels that remain open on the side of the endplate and offer access to the bolts, which connect the endplate to the mainplane. 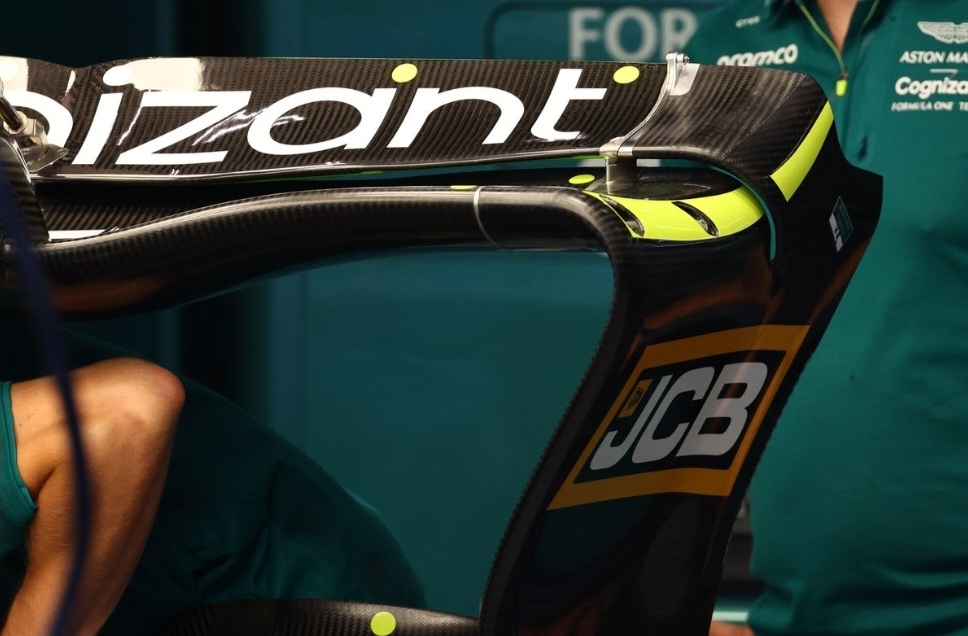 Circuit-specific trimming of the front and rear wings as well as the beam wing.

Trimmed rear brake duct winglets and a smaller beam wing for Spa. Haas has trimmed the upper flap of its rear wing for Spa-Francorchamps, as it looks to reduce some of the drag being generated and improve straight-line speed. 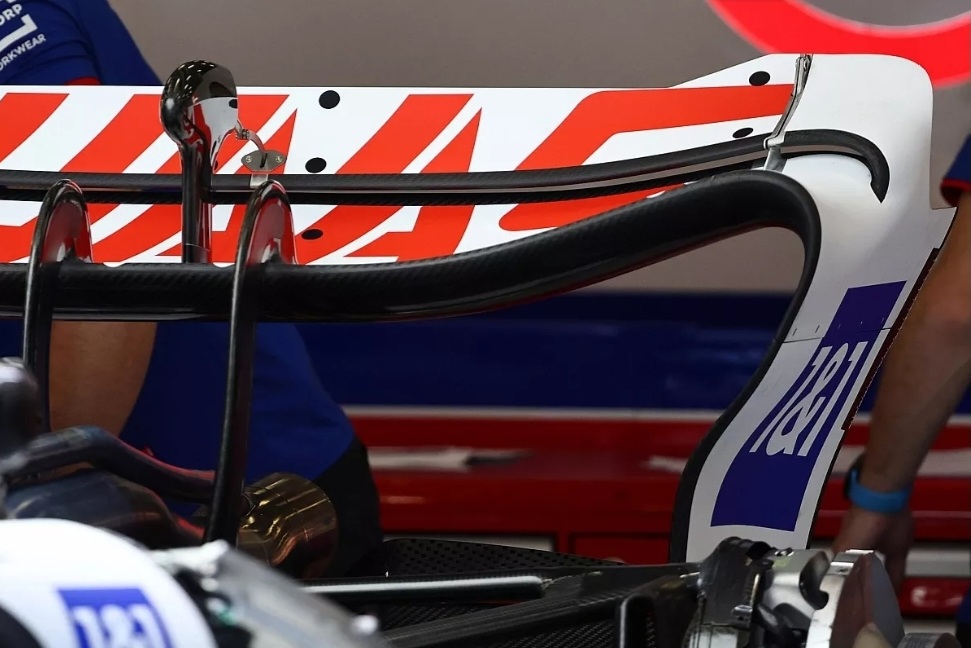 Alfa Romeo has also ceded some of its rear wing’s downforce by trimming the trailing edge of the upper flap. The Hinwil team has had to be careful in doing so, in order to leave enough of the central section intact to give the DRS mechanism the room it requires to attach to the flap. 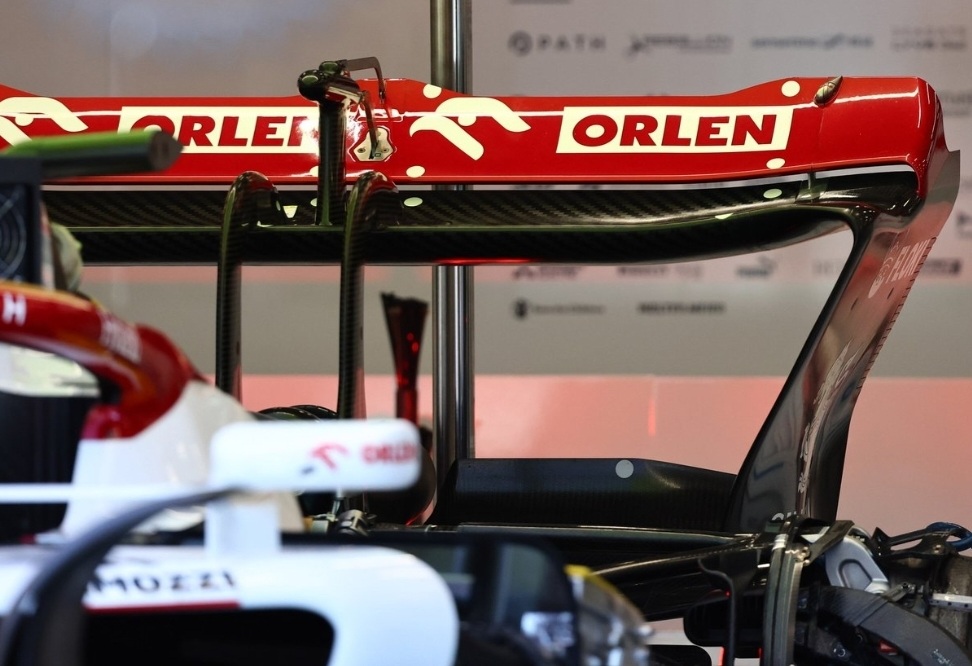 Alfa Romeo, like many other teams on the grid, deploys an internalised shroud within the main brake drum this year in order to help manage temperatures and the airflow’s passage. 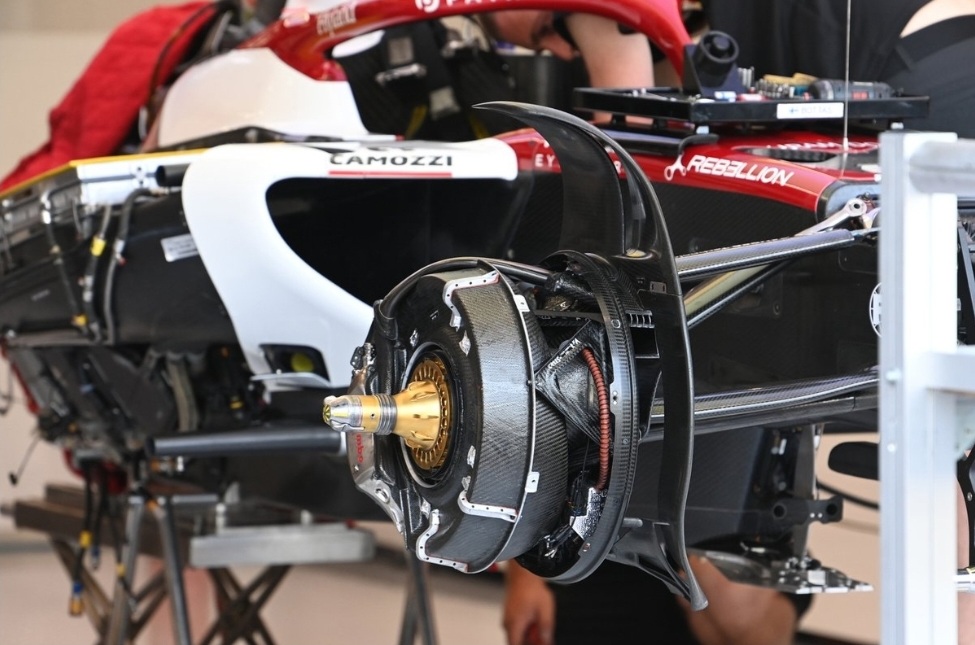