Another pole for Ferrari: qualifying for the French Grand Prix

An interesting fight will be waiting for us, but let's first look at the reactions of the drivers to their starting positions 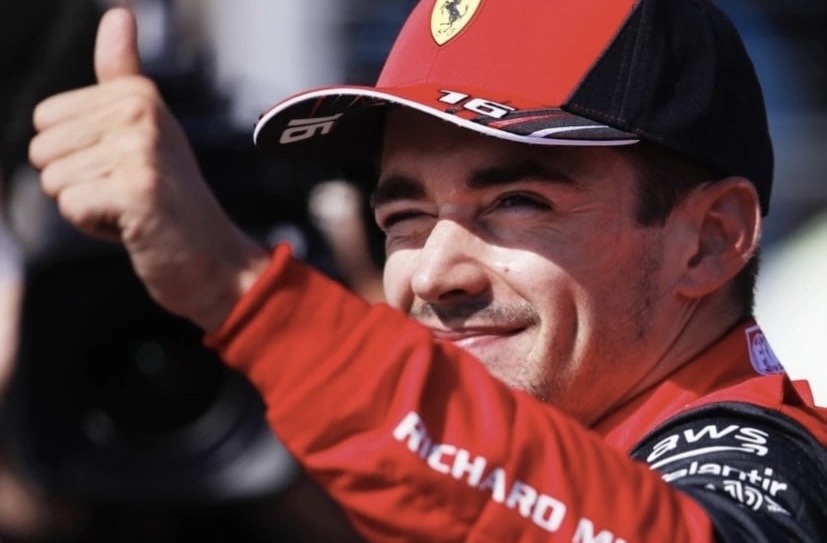 Qualifying for the French Grand Prix took place yesterday, here are the results: 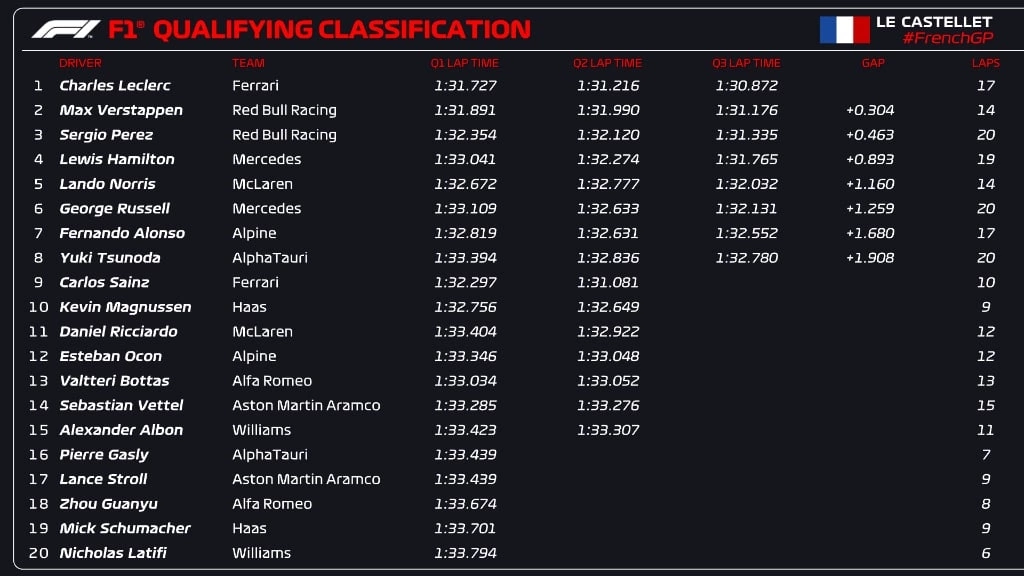 Charles Leclerc won the French Grand Prix qualification, winning the seventh pole of the season and the sixteenth pole of his career. Carlos Sainz reached the final of qualifying, where he helped his teammate, accelerating him on the straights. He did not show time, because he will start from the last row after a penalty.

Charles Leclerc (1st): "Carlos did his job perfectly and helped with the acceleration in the qualifying final, which helped me a lot. Due to this, I played two tenths on the straights of the second sector, which simplified the task on the third, because I knew that I had time to spare. Great job by Carlos!

Time will tell what awaits us in the race. Our cars are tuned for higher downforce, which is better for tires. On the other hand, the opponents have an advantage on the straights. On this track it is difficult to hold on to another car, so it is critically important to keep the lead at the start, and then control the condition of the rubber.

Interestingly, Red Bull has a different approach to the settings this weekend. Tomorrow we will find out which of us was right”. 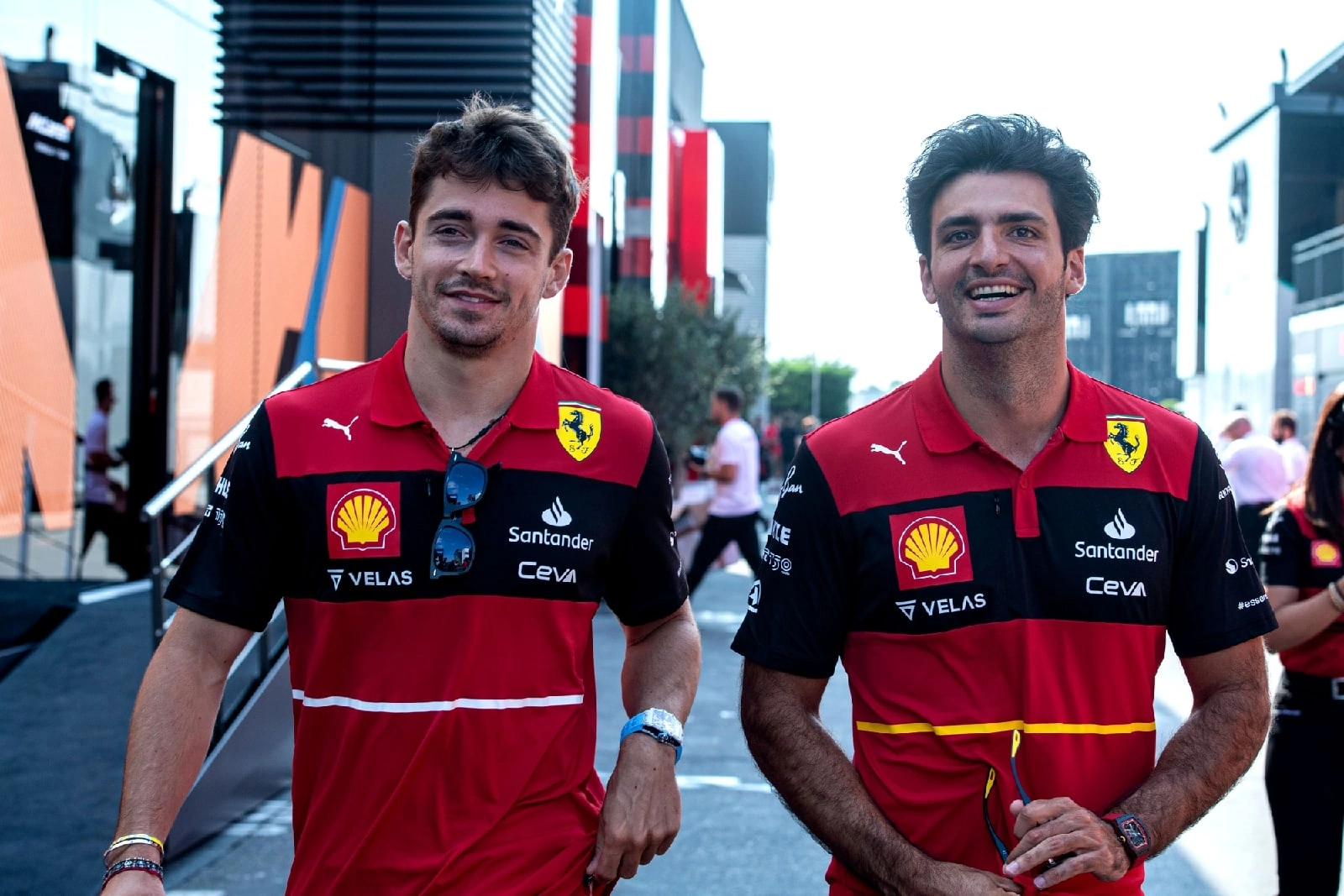 Carlos Sainz (9th - 19th): "We originally planned that I would reach the qualifying final and help Charles by accelerating on the straights. We even practiced this maneuver in training – in the end we succeeded.

Tomorrow Charles will have to fight Max without my help, but I think he will succeed. We have a fast car, and I have no doubt that the team will develop an excellent strategy.

I am fast throughout the weekend and I managed a very good lap in the second part of qualifying. Of course, it's a pity that we didn't manage to compete in the final, but I'm glad that Charles won the pole.

This year we were criticized a lot for choosing a strategy, but today we worked as a team. We have a great atmosphere, and each of us tries to help each other as much as possible”. 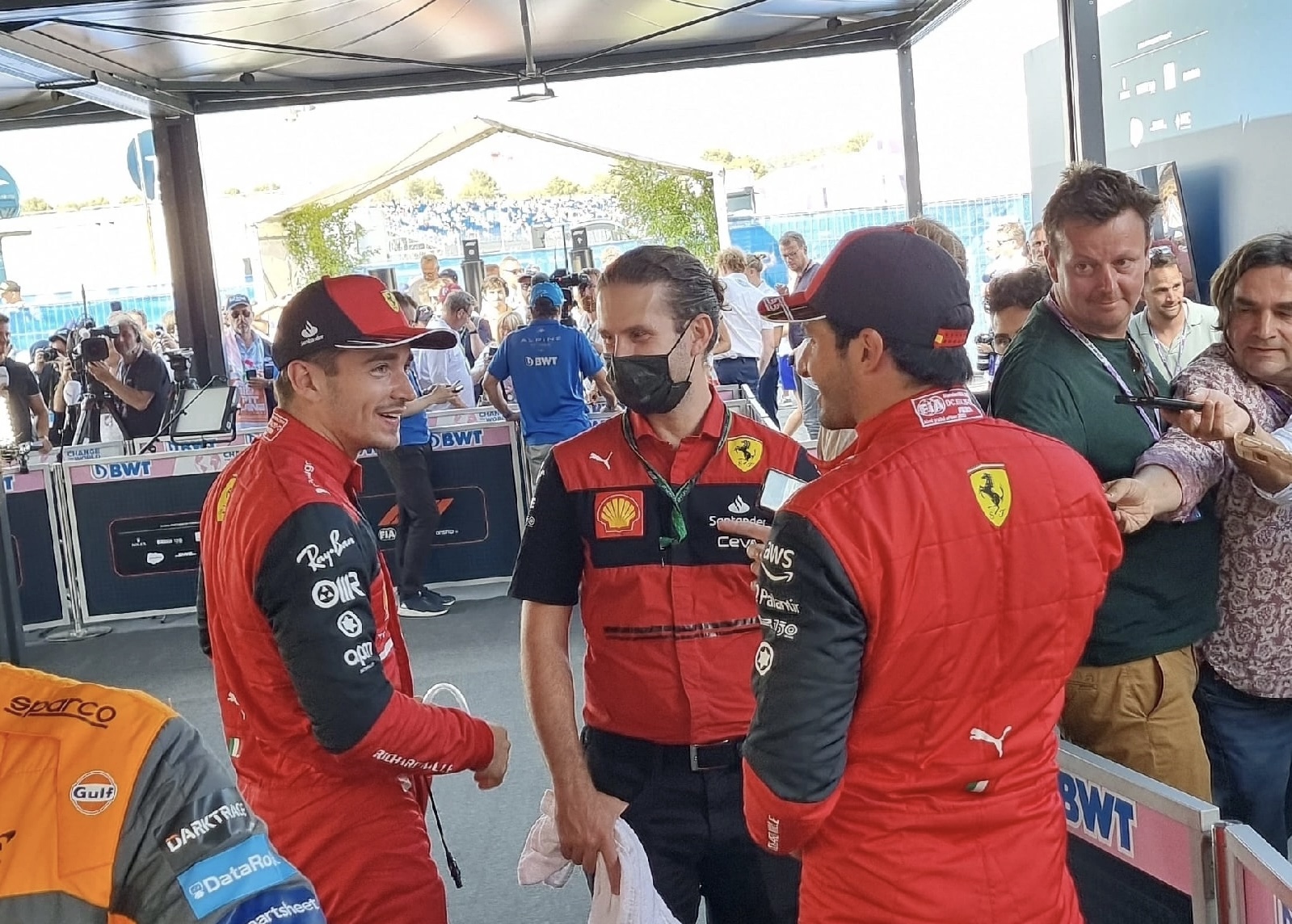 Max Verstappen and Sergio Perez showed second and third time in qualifying. Red Bull Racing expects that the high speed of the RB18 car on a long series of laps will help in the fight against Charles in the race.

Max Verstappen (2nd): "The final session is not the whole qualification, but the car lacked traction. Qualifying turned out to be a little more difficult than I expected, but our car is fast at the race distance, and I hope that tomorrow the advantage will return to us.

We are fast on the straights and I hope we can use that in the race. Hotter weather is expected tomorrow, but so far it is only clear that Ferrari is fast again”. 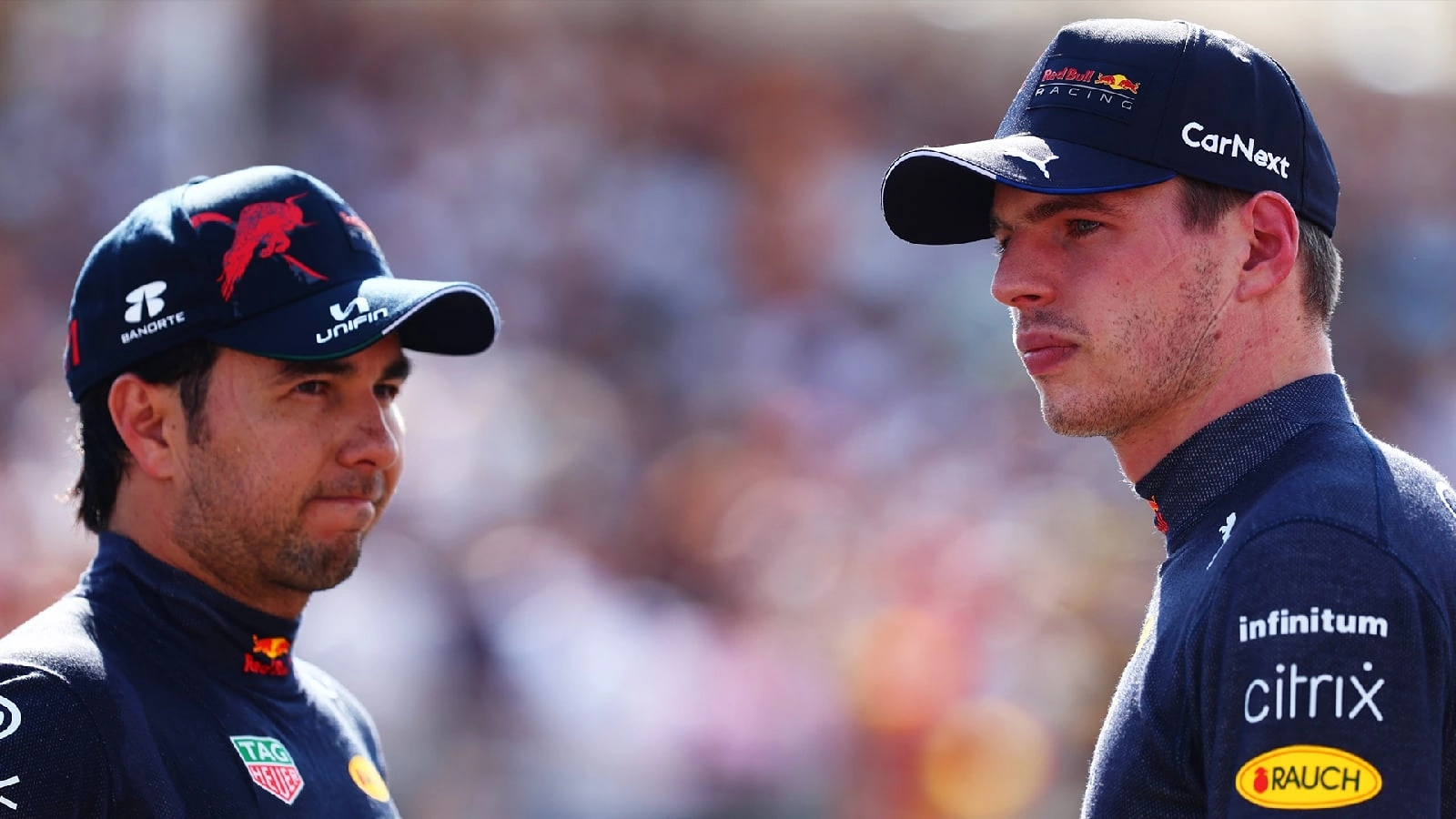 I have a good starting position. In the race I will try to win back and finish ahead of the red cars. They were very fast today, but we'll see what happens tomorrow”. 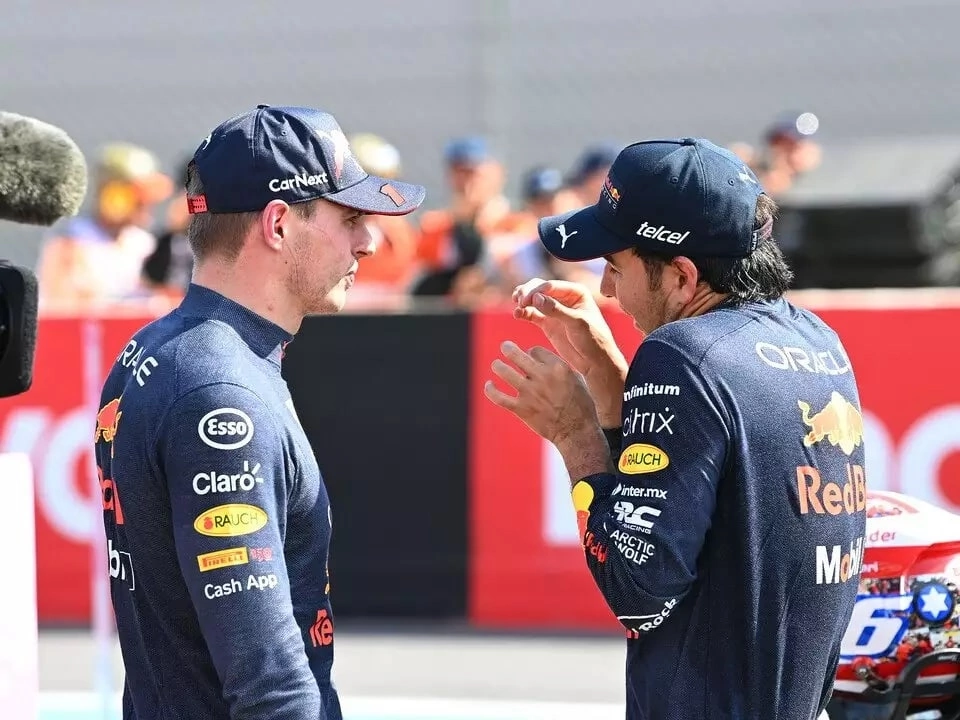 Mercedes' best result in qualifying for the French Grand Prix was Lewis Hamilton's fourth time. The seven-time world champion noted that Ferrari and Red Bull Racing have increased their advantage this weekend, and he does not know what this is due to.

Lewis' teammate George Russell qualified sixth and is also concerned about the increased gap from the leaders.

Lewis Hamilton (4th): "I am quite happy with my performance and the lap in the final is a good attempt. However, for some reason, this weekend we, like the others, are more behind the two leading teams - it seems that they are playing in their own league. I do not know why the gap has increased so much compared to the last stage.

I found myself in the role of catching up due to missing the first session of free races, but I am pleased with the progress made. Everyone at the base worked a lot with us. In the final training session, we took a step back, but then we were able to fix everything. We continue to fight, the opponents have problems behind, so we don't give up”. 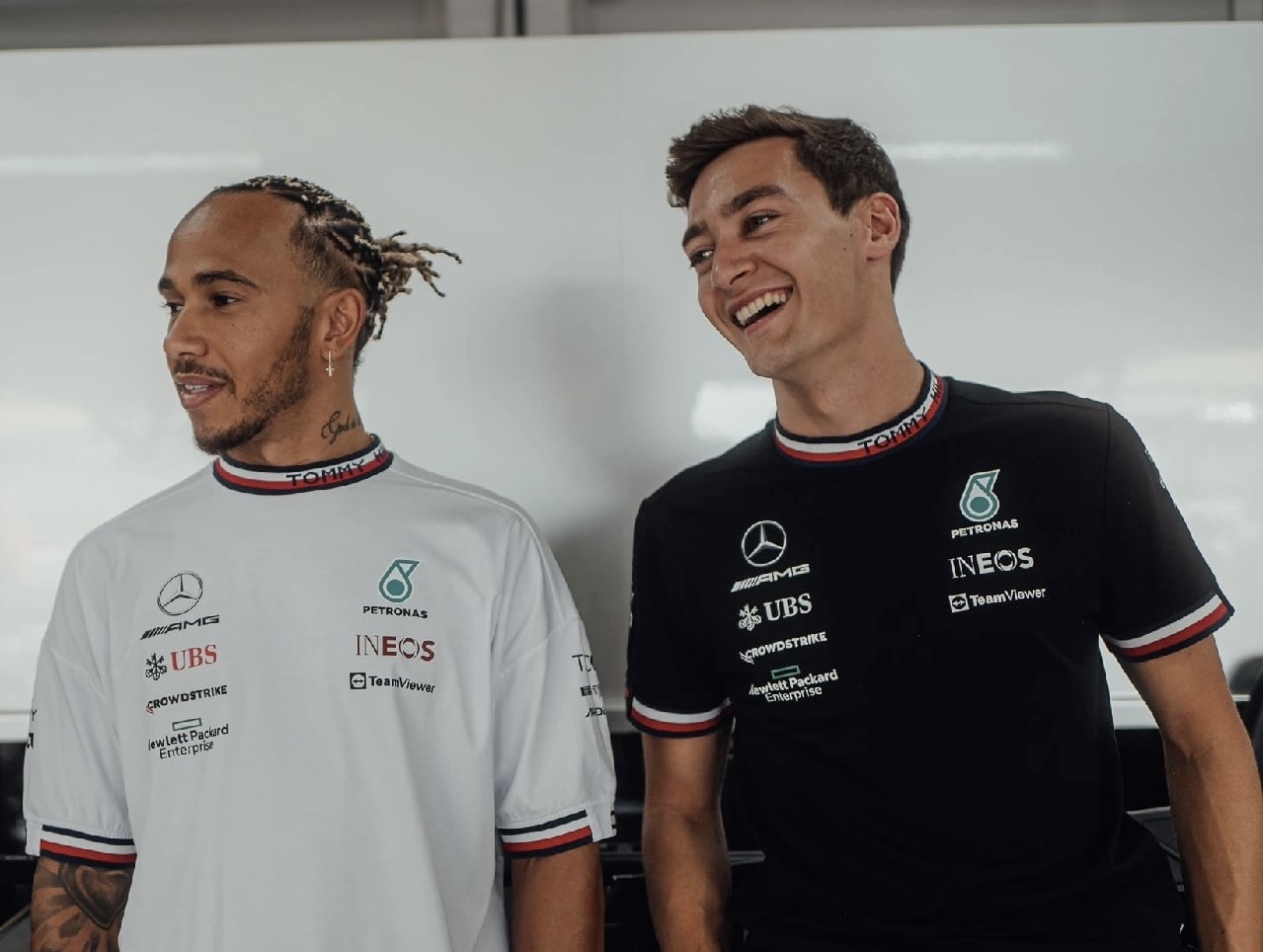 George Russell (6th): "I have a feeling that we were a little further than we expected, especially after Friday's results. I had a good first attempt in the final and was in fourth position, but then I made a mistake on the last lap.

In fact, I am more concerned about falling behind the leaders than the starting position. We need to understand what this is due to, since we are the only team that usually reduces the gap from the leaders on Sundays.

I hope Lewis can fight Sergio Perez tomorrow, but Charles and Max are probably too fast for us at the moment”. 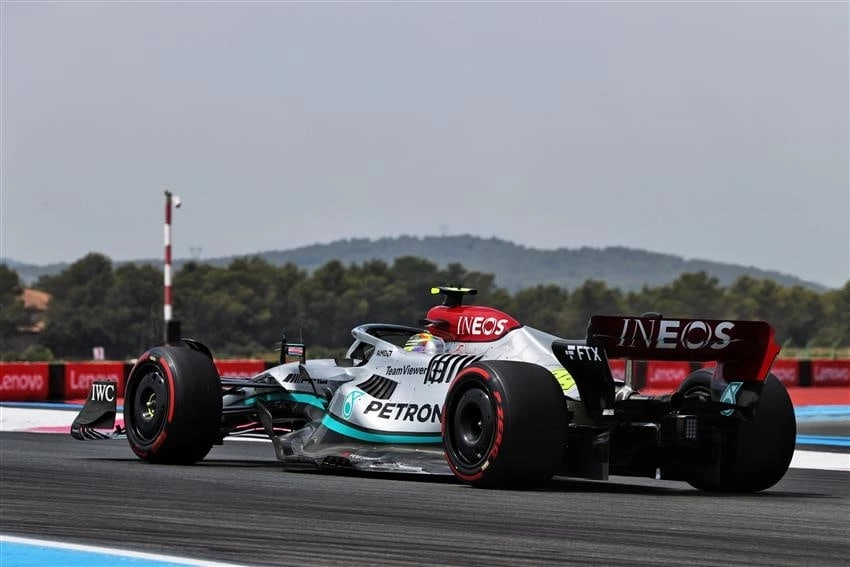 Lando Norris showed the 5th time in qualifying at the French stage of the championship, and according to him, after such a lap, he has a feeling that he is worthy of pole position. What a great result! Daniel Ricciardo, his McLaren teammate, was in the final protocol on the 11th line. Although the Australian did not qualify for the final session, he also called the result positive.

Lando Norris (5th): "A very good day. Before the qualifiers, we were wondering if we could even get to the final, because we were too far behind in speed. In general, I am satisfied: I want to say that my lap in the final session was really good.

After such a lap, it seems that I should be on pole! I think in other categories I would be surprised if I missed pole, but today I still lacked more than a second. In any case, the team did a good job and also tried to squeeze everything out of the car, so in tomorrow's race we will start from the best position we are capable of”. 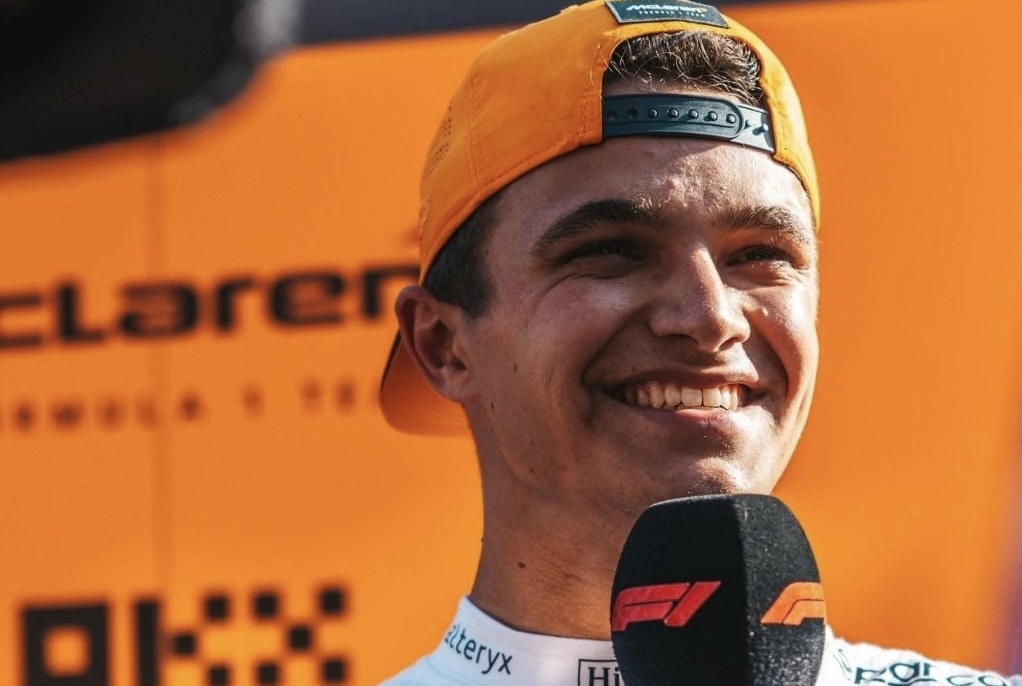 Daniel Ricciardo (11th - 10th): "I think the result is positive, but we have to analyze my lap in detail to understand why I couldn't achieve what I wanted on some sections of the track. Still, I think that overall we have made a step forward.

I think our car coped well with some turns, but not in the best way with others. In general, there are some improvements, but I still had difficulties on some sections of the track: when I tried to attack to win back a few more tenths, there was no feeling that the MCL36 was behaving the way I needed”. 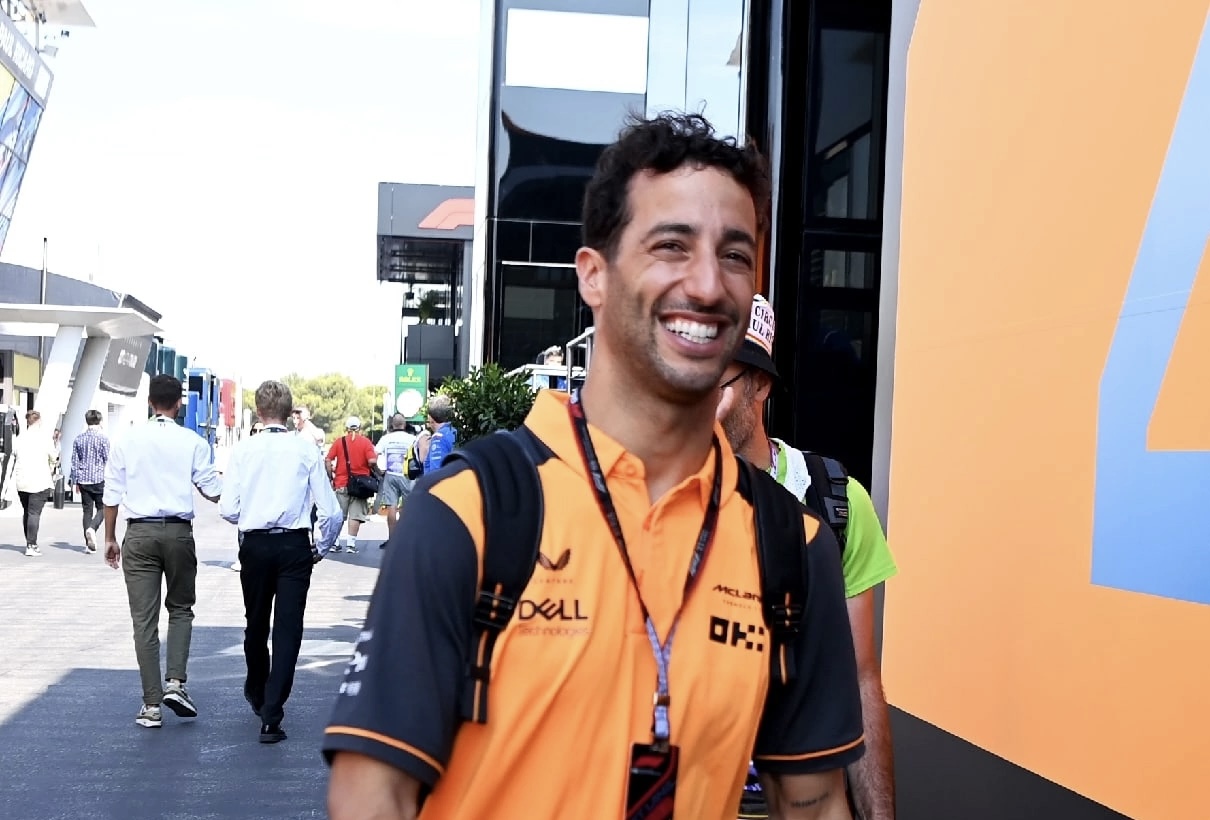 In Paul Ricard, Fernando Alonso qualified for the final, and his teammate Esteban Ocon dropped out of the fight in the second session…

Fernando Alonso (7th): "The weekend was not easy for us, but in qualifying I won a good starting position.

I wasn't happy with the balance in training, we tried to improve it all weekend, but we had a good pace in the long series on Friday, let's see if it will allow us to recoup.

An important factor will be monitoring the condition of the tires – here they quickly overheat and granulate, which will be a real test in the heat. The loss of time in the pit lane here is one of the highest in the season, so the strategy of one pit stop will be optimal”. 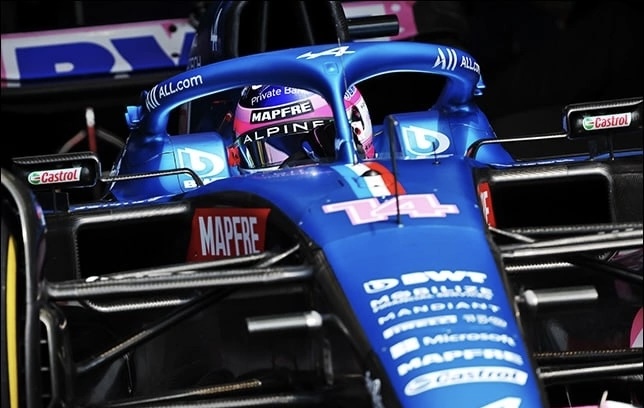 Pierre Gasly unsuccessfully qualified for the French Grand Prix at home – the AlphaTauri driver did not enter the second session, showing only the sixteenth time. The session turned out much better for his teammate Yuki Tsunoda – the Japanese driver reached the final for the third time in the season.

Yuki Tsunoda (8th): "It's nice to be back in the qualifying final with an updated car - the excellent work of the team allowed us to take a good position. We are back in the fight for the places we want to fight for, so I am quite happy, but tomorrow we have to finish the job.

We expected difficulties with adapting to the updated car, so the first and second training sessions turned out to be difficult, but together with the engineers and mechanics we were able to recoup. The team changed the balance settings, which immediately helped – it was a turning point that allowed us to show today's result.

All the employees at the base did a great job to improve the car in medium-speed turns. If we talk about the pace over a long distance, it has also increased thanks to new products. We have improved our work with rubber and expect to earn points tomorrow.

The strategy will be important – you have to choose between one or two pit stops, but I am sure that the team will make the right decision”. 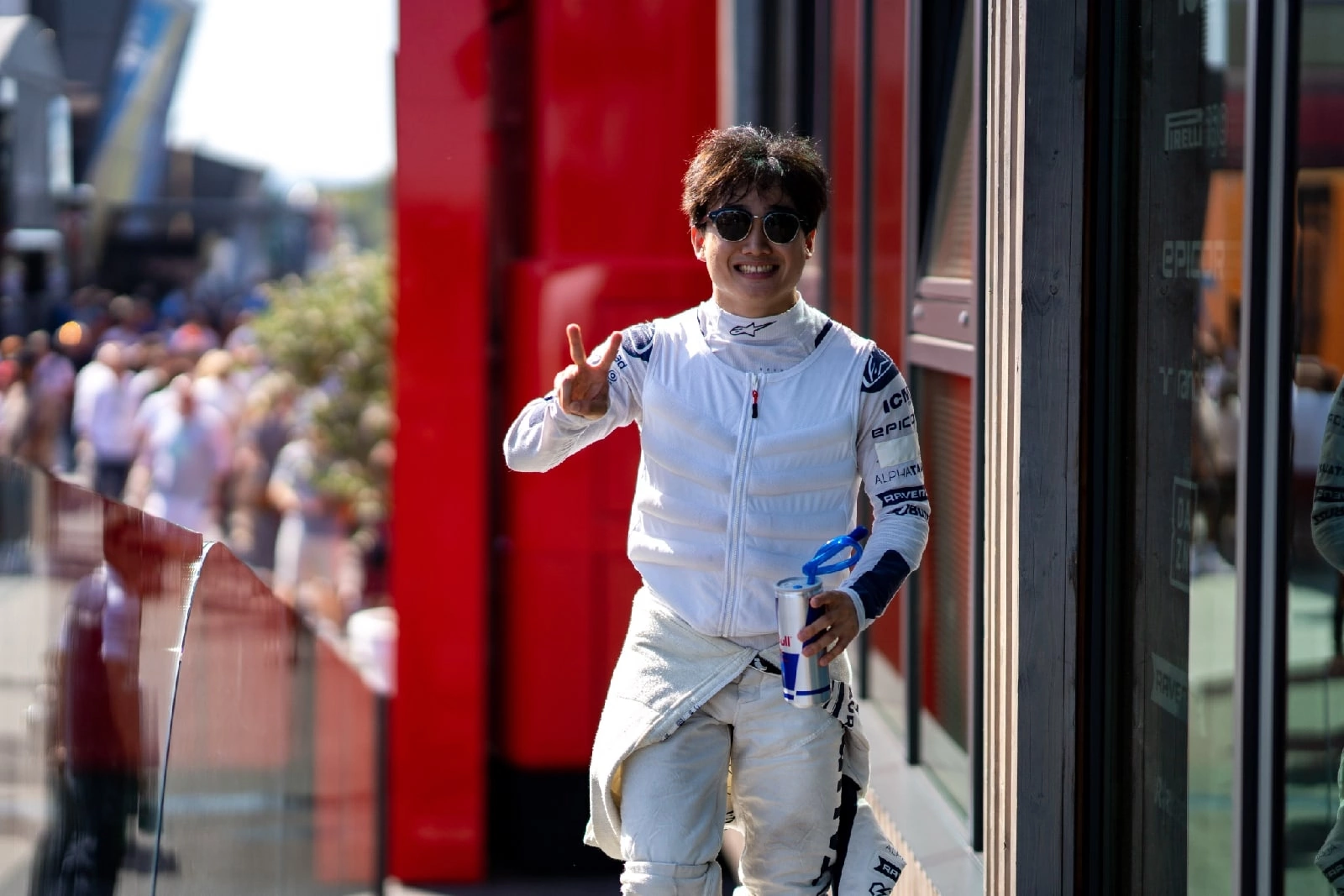