How Mercedes' porpoising issues may still continue to haunt them

Since the beginning of the 2022 F1 season, every team on the grid has made developments in how they control porpoising. But Mercedes still seem to be struggling with the same issue 7 races into the 2022 season 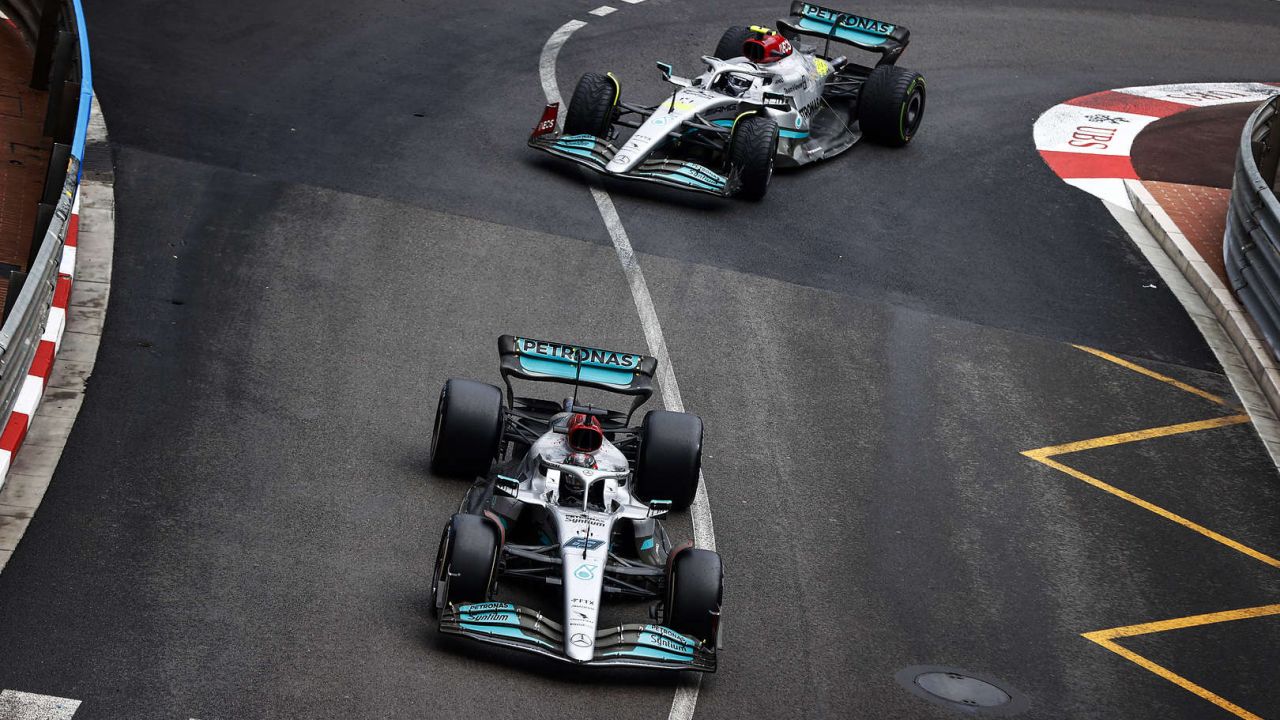 At the beginning of the 2022 Formula1 season the main reason for Mercedes' poor performance was: PORPOISING

A major part of this issue has been overcome but Mercedes' 2022 car still has multiple shortcomings that have to be solved if Lewis Hamilton or George Russell have any hope of winning races this season.

In Barcelona Mercedes were able to correct many of their porpoising issues, but Mercedes didn't enjoy the same pace in Monaco that they did in Barcelona. But in Monaco the bouncing of the car got so bad that Hamilton screamed on the radio saying, “It’s so bouncy out here, I’m f***ing losing my mind”

This wasn’t about the aerodynamic porpoising the car suffered before Barcelona, that was largely corrected in Spain. But rather a completely different consequence of the Mercedes' rather unique design concept (no sidepods).

The low-speed and bumpy nature of Monaco puts an emphasis on several key areas:

At Monaco the Mercedes W13 just didn’t have enough suspension compliance to prevent it being repeatedly pushed into the ground. It was a mechanical limitation, the reason being a suspension developed for a very stiff aerodynamic platform.

The smaller sidewalls of the 2022 tyres means the suspension has to do alot more of the damping than previous years and this years Mercedes’ rear suspension looked to be in some difficulty at Monaco.

It’s worth considering that for 2022, clever hydraulic suspension trickery has been outlawed. This was an area in which Mercedes previously excelled, such as the inertia dampers that it ran front and rear on last year’s car basically doing the work in controlling any bouncing while the springs themselves had very little use....... Other teams seem to have been sharper at finding new solutions, with Russell particularly envious of how well the Ferrari seems to ride kerbs and bumps at all tracks.

The car was porpoising since the start of the weekend at the ride height the car needed to be run in order to avoid any damage. It simply wasn’t producing enough downforce and its ride quality is still poor, which seems to be a legacy of the car’s inherent stiffness. This simply gave the car a different problem to that which it suffered earlier in the season.

How Mercedes tried to recover in Monaco:

The car was simply crashing into the ground over the bumps and the lack of compliance in the suspension and started to cause damage to the venturi tunnels under the car. To try to minimise the bottoming-out of the car, the rear suspension travel was used and the team increased the rear ride height even further than would normally be the case around the street track. This costs a lot of rear downforce.

In order to be quick around such tight corners on Monaco, the driver needs the front end of the car to be responsive. Mercedes switched back to their older (pre-Miami) front wing because that gives more downforce to the front axle, to give that responsiveness. The front wing upgrade in Miami gives better outwash, helping the rear aerodynamics and giving more total downforce, but with less directly produced by the front wing.

The old wing gave Lewis Hamilton and George Russell the initial response they needed around Monaco’s streets but probably made the rear end slide around more than it already was when running such a big rear ride height. Hamilton confirmed this by saying after qualifying, “We have poor rear downforce, Loads of front, and nothing on the rear.” 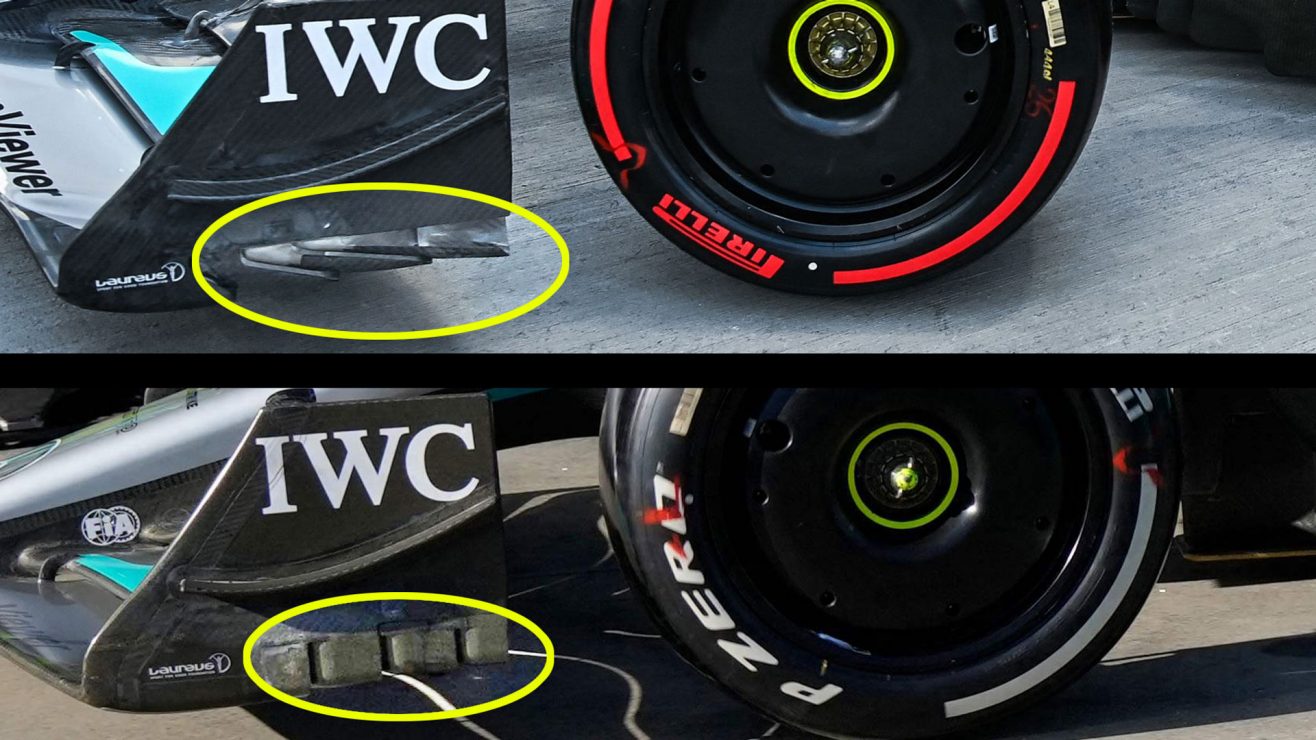 {Below} Older wing (pre-Miami) that was used in Monaco......... {Top} Upgraded wing introduced at Miami. {Top}The Upgraded wing with the massive cuts at the bottom of the endplates give better outwash to the airflow around the front tyres and all the way down the car...........{Below} The older front wing used at Monaco keeps more of that airflow for itself across its full width.

What Mercedes needs to do to gain pace and correct their porpoising issues:

In simple terms Mercedes now needs to create a better mechanical and aerodynamic platform. If that sounds obvious it’s because it kind of is. Unlike its rivals, Mercedes hasn’t really developed its car much beyond what appeared in testing. More load and a more stable car will allow the drivers to attack more and should also help with the rather frequent tyre warm-up issues that have shocked the Mercedes pitwall on several occasions this year.

What do the next few races hold for Mercedes:

It seems that for the W13, there just isn’t a happy Monaco set-up window within its concept and that with two slow corner tracks coming up....Baku(azerbaijan) and Montreal(Canada). But James Vowles (Hamiltons race engineer) has already given a statement saying that the Mercedes W13 might face similar issues as Monaco in the next two rounds because of the slow and bumpy nature of Baku and Montreal Therefore it may be until Silverstone before we see another Barcelona type performance from the W13 because Silverstone will be a mixture of high and low speed corners similar to Barcelona.