The next episode of the Leclerc-Verstappen battle 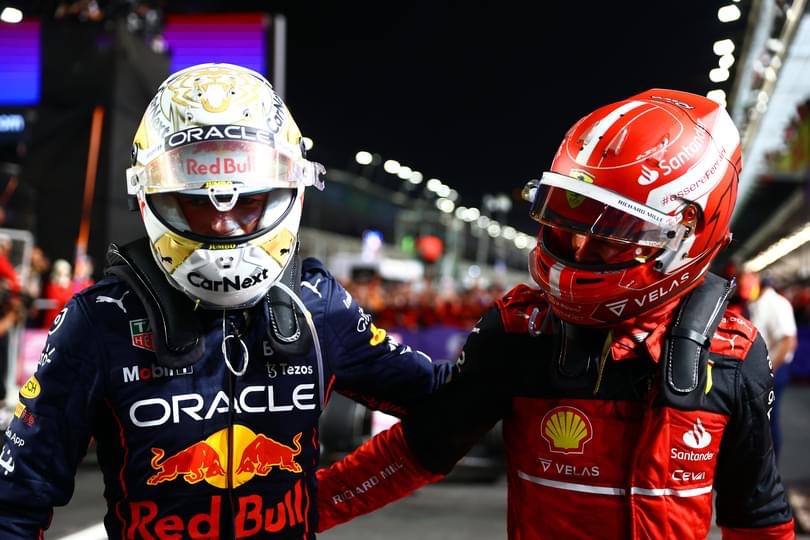 The viewers of last year’s Saudi Arabian Grand Prix experienced a chaotic race with a few questionable decisions or situations, red flags, and excitement. As well as in this year’s F2’s sprint race. Everyone was expecting such a memorable evening, even today.

It was clarified yesterday that a fascinating battle is in sight between Red Bull and Ferrari. The two teams chose different aero configurations: Ferrari’s choice was a one with higher downforce and wider rear wings.

“LIGHTS OUT AND AWAY WE GO”

The start was managed cleanly without accidents. The drivers tried to be more careful after Mick Schumacher’s terrible crash yesterday.

The maximum gained and lost position was three after the first lap. The most important overtaking was Max Verstappen’s one against Carlos Sainz.

After 7 laps an exciting battle unfolded between the two Alpines. They didn’t succeed in defeating each other. It caused that George Russel in front of them got more than 5 seconds advantage and Valtteri Bottas (also Kevin Magnussen a lap later) caught up with them. They were fighting with each other during several laps which was wonderful and actually what the new regulations had promised.

Unfortunately it ended as soon as Esteban Ocon started to struggle with battery charging problems.

The pit stops began in the 14th lap of the race. It’s been proven again that the time of a pit stop has increased compared to the last year. The leading Checo Pèrez has been misled by Ferrari as they asked Charles Leclerc to pit but as soon as Pèrez did it, he did not. It was a logical decision from both sides. If Checo hadn’t come to the box, Charles could have overtaken him with an undercut. Although a lap later it turned out this trick was the end of the Mexican’s dreams about the win.

Pèrez’s unfortunate was Nicholas Lafifi. His car had hit the barriers, he lost the control and ended up in the wall. The safety car came, the marshals were cleaning the track and they removed the Williams also.

But why was it the saddest news for Pèrez? Because it meant a free pit stop for his rivals. When the safety car left in lap 21 he was only the fourth.

In addition the race was not even halfway through!

There were some relaxing laps but it was just the silent before the storm. In lap 36 and 37 -with dramatic speed- three drivers were dropped out of the race. Fernando Alonso, Daniel Ricciardo and Valtteri Bottas couldn’t finish the race caused by engine problems.

EPIC BATTLE UNTIL THE CHECKERED FLAG

Verstappen had decided in lap 42 that it was enough from chasing Leclerc and he started to catch him. The result was an epic and breathtaking run until the finish line. They switched positions a few times; it was a classic wheel-to-wheel battle for what everyone had been waiting for.

Finally Verstappen won the 2022 Saudi Arabian Grand Prix in Jeddah. It’s been a correct, sportsmanlike and maximally respectful fight- as they both mentioned. They have already congratulated to each other in the car after the finish line. Sainz finished in third place so under the podium two famous fathers were looking up with proudness in their eyes when their even more famous sons were celebrating the new big success in Formula 1.